US ‘mother of all bombs’ kills 36 Isis militants in Afghanistan 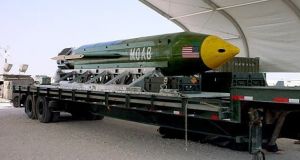 A GBU-43 MOAB: The weapon fired on Thursday targeted a network of caves and tunnels used by Islamic State in the mountainous eastern province of Nangarhar near the border with Pakistan. Photograph: EPA/Department of Defense 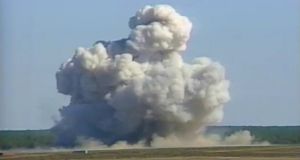 A video grab from 2003 footage showing a mushroom cloud created by a MOAB bomb prototype moments after impact at a test site in Florida. File photograph: US Defence handout/AFP/Getty

US forces dropped a massive GBU-43 bomb in the eastern part of the country on Thursday, the first use by the United States of the largest non-nuclear bomb in its arsenal.

Gen John Nicholson, the top US military commander in the country, said on Friday that the “weapon achieved its intended purpose”, stressing that the decision to deploy the 21,600-pound concussion bomb was tactical.

“This was the first time that we encountered an extensive obstacle to our progress. It was the right time to use it tactically against the right target on the battlefield” he said, adding that the strike demonstrated the commitment of Afghan forces, Afghan government and US partners to defeat the Islamic State terror group also known as Isis.

While the president of Afghanistan, Ashraf Ghani, echoed Gen Nicholson’s comments, stating that the bomb was part of the clampdown on Islamic State, the country’s former president, Hamid Karzai, berated the United States.

“This is not the war on terror but the inhuman and most brutal misuse of our country as testing ground for new and dangerous weapons,” he wrote on Twitter. “It is upon us, Afghans, to stop the #USA.”

The MOAB weapon – dubbed the “mother of all bombs” though it actually stands for “massive ordnance air blast – targeted a network of caves and tunnels used by Islamic State in the mountainous eastern province of Nangarhar near the border with Pakistan. No civilian casualites were reported.

The move came as US president Donald Trump prepares to send his top national security official to Afghanistan next week. Lieut Gen HR McMaster will travel to the region to assess conditions in the war-torn country, where approximately 8,600 US troops are deployed as part of a 13,300-strong Nato contingent.

The visit will mark the first trip by a senior Trump administration official to the country since Donald Trump assumed office. His adviser and son-in-law, Jared Kushner, visited Iraq earlier this month.

Nato’s involvement in Afghanistan was one of the main areas of discussion between Mr Trump and Nato secretary general Jens Stoltenberg on Wednesday at a meeting in the White House.

In February, Gen Nicholson told the Senate armed services committee in Congress that the US had reached a “stalemate” in Afghanistan, warning that it would need thousands more troops to effectively train Afghan soldiers, prompting speculation that Mr Trump may consider sending more troops to the region.

Meanwhile, at the end of a dramatic week for US foreign policy, officials in Washington awaited signs of activity in North Korea as the country prepared to mark the birthday of the its founder Kim Il Sung on Saturday. The anniversary has prompted expectations that Pyongyang may launch a sixth nuclear missile test this weekend.

US vice president Mike Pence arrives in South Korea on Sunday for the start of a 10-day tour of Asia, which will include visits to Japan and Indonesia.

Mr Trump told reporters in Washington on Thursday that “North Korea is a problem”, that will be “taken care of.”

North Korea’s vice foreign minister Han Song Ryo said in an interview with the Associated Press on Friday that Mr Trump’s policy toward his country is more “vicious and aggressive” than previous administrations.

“We certainly will not keep our arms crossed in the face of a US pre-emptive strike,” he said, warning: “we will go to war if they choose.”