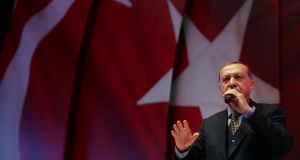 Turkish president Tayyip Erdogan makes a speech during an event ahead of the constitutional referendum in Istanbul. Photograph: Reuters

The April 16th vote will decide on the biggest change in Turkey’s system of governance since the modern republic’s foundation almost a century ago, potentially replacing its parliamentary system with an executive presidency.

Polling company Konda said the number of “yes” voters stood at 51.5 per cent, but said its survey had a margin of error of plus or minus 2.4 per cent.

“When this forecast is considered within the survey’s margin of error, a final judgement might be misleading,” Konda said in a statement.

Its survey, carried out face-to-face with 3,462 people in 30 provinces on April 7th-9th, showed turnout for the vote would be around 90 per cent. It said the level of undecided voters had fallen to 9 per cent from more than 20 per cent in January and there was no evidence to indicate their preference..

The survey by pollster Gezici put support for the constitutional change at 51.3 per cent, with “no” votes at 48.7 per cent after the distribution of undecided voters. The poll was carried out face-to-face with some 1,400 people in 10 provinces on April 8th-9th. In its previous survey a week earlier it put the “yes” vote at 53.3 per cent.

Gezici said many people did not want to express their views during the poll’s fieldwork. It put the level of undecided voters at 9.9 percent.

“One of the basic problems with the work during the referendum process was the evident increase in the level of people’s concern about expressing themselves,” Gezici said in its analysis of the results.

The referendum campaign has damaged Turkey’s ties with some European allies. Erdogan has described the banning on security grounds of some rallies by Turkish ministers in the Netherlands and Germany as “Nazi-like” tactics.

Voting for Turks living abroad finished on Sunday and Erdogan said this week that those overseas had turned out in greater numbers, a development that pollsters say could benefit him.