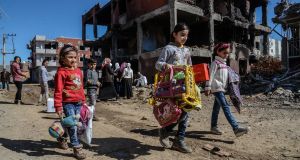 Young girls walk next to ruined houses and shops in Cizre on international women’s day last year. The buildings were destroyed in an operation by Turkish authorities against Kurdish opponents. Photograph: Ilyas Akengin/AFP/Getty

Encircled by the roiling Tigris river and steep hills, Cizre sits in a corner of a region that has been no stranger to conflict. As the embers of the Ottoman empire went out a century ago, its Christian and Assyrian populations were slaughtered, their bodies thrown into the Tigris. Before that, Kurdish uprisings regularly drew blood.

Today the town of 100,000, nestled against a Kurdish canton of northeast Syria, is a place where many are struggling to reclaim their lives following a massive military operation last year.

It was in October 2014, when Turkish authorities refused to allow Kurds enter the Syrian border town of Kobane to join their brethren in their fight against the Islamic State (Isis) terror group, also known as Daesh, that Cizre first erupted.

Their anger, fuelled by the killing of several Kurdish youths allegedly by security forces, morphed into a full-blown popular uprising

Armed youths took over the town’s outlying neighbourhoods, where road blocks and snipers made it impossible for police to enter. Their anger, fuelled by the killing of several Kurdish youths allegedly by security forces, morphed into a full-blown popular uprising across the southeast of Turkey and, by late summer 2015, parts of Cizre and several other predominantly Kurdish towns declared themselves independent of Ankara.

A military operation involving thousands of soldiers and special forces was launched and in the following winter a nine-week siege brought Cizre to its knees.

The worst fighting and destruction occurred in its Cudi and Sur districts. Using tanks and helicopter gunships, Turkish forces finally ousted the militants from the town in February last year, but not before the fighting took 263 lives, including those of 92 civilians.

Ankara says 666 terrorists were “neutralised”. A UN report said that during the operation “allegations of massive destruction, killings and numerous other serious human rights violations” were raised. The ghastliest incident occurred on February 7th when more than 100 people, many of them children, burned to death while hiding in basement shelters.

Locals and Kurdish politicians blamed the army for the atrocity; the Turkish government in turn accused “terrorists” of attacking the civilians. Independent investigators have since been denied access to the districts and affected families.

Across Turkey hundreds of police and soldiers have been killed by Kurdish separatists over the past two years and the fear in Cizre clearly runs both ways. A policy of deploying security forces from non-Kurdish parts of Turkey who can’t speak Kurdish has added to the local animosity.

At the heavily guarded police headquarters in the town centre, officers speak of the town’s outlying neighbourhoods such as the Cudi district as being nests for terrorists. “Have you heard of the PKK?” one officer asks. “Terrorists, just like Daesh [Isis].”

Now, ahead of Turkey’s controversial constitutional referendum on Sunday, locals expect little change or improvement to their town or lives. In the Sur district, a grocer who asked not to be identified says the referendum means little to him.

“Yes, no, not voting at all – it makes no difference to me,” he says wearing a bemused smile. In a corner shop two alleyways deeper into the neighbourhood, a security officer tells this journalist to leave the area.

On many street corners, and patrolling most routes, are military vehicles and unmarked SUVs packed with security forces. The only visible signs of the referendum paraphernalia that is found plastered across towns elsewhere around Turkey is an occasional pro-government evet – or “yes” – poster. Cizre very much feels like a town occupied.

Though new street lights are being installed in the town centre, these rebellious neighbourhoods tell a different story: many of the buildings destroyed in the fighting have been cleared or levelled and walls on almost every alleyway have their own decoration of bullet holes.

In the Cudi district on the town’s northern outskirts, a twentysomething man who asked not to be named, said he believed most of the neighbourhood would vote against the proposed constitutional changes.

A semblance of normal life has returned to the district, with children in the streets, but there are few working-age men to be seen and the scars of war are everywhere.

It’s not difficult to grasp why the ruling AK Party struggles for support here. In the June 2015 general election, the Kurdish-rooted HDP won an historic 13 per cent of the popular vote and entered parliament for the first time. All four MPs for Sirnak, the province in which Cizre sits, are members of the HDP; in the snap election that followed in November 2015, 93 per cent of votes cast in Cizre went to the HDP, one of the highest rates anywhere in the country.

But since a law stripping many politicians of parliamentary immunity was introduced last May, 12 HDP members of parliament, including both party co-chairs, have been imprisoned. Dozens of Kurdish mayors and regional representatives have been detained on accusations of terrorist links, claims that the party denies. Others have had their passports revoked, barring them from leaving the country. Several have fled to Europe.

When a decade ago the AK Party could depend on backing from conservative Kurdish tribes and extended families in southeast Turkey, the violence that has shaped life here over the past several years means that’s no longer the case. Ankara now casts Kurds and their political representatives as part of a terrorist threat. The divide between Turk and Kurd has hardened markedly since peace talks between Ankara and the militant PKK collapsed in July 2015.

HDP politician Aycan Irmez, whose home was raided by police last November, says the people of Cizre declared during the Kurdish Newroz celebrations last month that they would vote against the government-backed constitutional amendments.

“The people have not submitted to the pressure and hard politics that the AK Party government has implemented in the last two years,” she says.