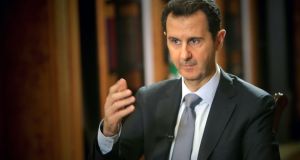 Syrian president Bashar al-Assad made the comments in an interview with AFP. Photograph: Joseph Eid/AFP/Getty Images

Mr Assad also said Syria’s military had given up all chemical weapons, AFP said on its Twitter account, quoting remarks in an interview with the Syrian president.

The US and its allies say the Syrian military carried out the attack, something Syria has already denied.

The Syrian army said an air strike late on Wednesday by the US-led coalition hit poison gas supplies belonging to Islamic State, releasing a toxic substance that killed “hundreds”, but the coalition denied carrying out raids in the area.

A statement by the army, flashed on Thursday by Syrian state TV, said the incident in the eastern Deir al-Zor province proved that Islamic State- and al-Qaeda-linked militants “possess chemical weapons”.

The report could not immediately be independently verified.

US Air Force Col John Dorrian, a spokesman for the coalition, said it had carried out no air strikes in that area at that time.

“The Syrian claim is incorrect and likely intentional misinformation,” he said in an email to Reuters.

The US launched cruise missiles at a Syrian air base last week, in response to the poison gas attack in which more than 80 died.

Syria and its ally Russia deny Damascus carried out any such chemical attack. Moscow has said the poison gas in that incident belonged to rebels.

The US strike on the Syrian air base was the first time Washington has deliberately and directly targeted the Syrian government. It is separately waging an air campaign against Islamic State, also known as Isis, in eastern Syria.

The US military confirmed on Thursday that a misdirected air strike by the US-led coalition killed 18 allied fighters battling Islamic State earlier this week.

US Central Command said coalition aircraft were given the wrong co-ordinates by their partner forces, the predominantly-Kurdish Syrian Democratic Forces (SDF), for a strike intended to target Islamic State militants south of their Tabqa stronghold, near the extremists’ de facto capital, Raqqa.

The strike hit an SDF position instead, killing 18.

Central Command said the strike was launched on Tuesday.

Several nations have lent their air power to the US-led coalition to defeat the Islamic State group.

It was not clear which air force was behind the strike.

The SDF acknowledged the strike on Thursday, saying a number of its fighters were killed and wounded.