US drops ‘mother of all bombs’ on Isis target in Afghanistan 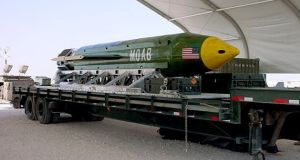 The prospect of greater intervention by the United States in the Middle East loomed on Thursday after the US military dropped its largest non-nuclear bomb on Afghanistan.

The GBU-43 bomb was dropped on a system of tunnels and caves thought to be used by Islamic State was the first time a bomb of this kind was used by the United States.

The 21,600-pound concussion bomb was dropped from a MC-130 aircraft, the Pentagon said.

“The United States takes the threat of Islamic State seriously. In order to defeat them, we must deny them operational space, which we did,” White House press secretary Sean Spicer said confirming that a strike had taken place at 7 pm local time.

He said that the United States had taken “all precautions necessary” to ensure that collateral damage was avoided. It is understood that the bomb was dropped in an extremely isolated and mountainous part of the country.

The non-nuclear bomb, known as the Massive Ordnance Air Blast (MOAB) bomb is also commonly called by its nick-name, the “mother of all bombs”.

The United States entered Afghanistan in 2001, targeting the Taliban in the wake of the September 11th attacks. But despite President Obama’s pledge to withdraw all American troops from the country, more than 8,000 American troops are still stationed there along with troops from other Nato countries and allies.

In February, John Nicholson, the top US commander in Afghanistan gave a bleak update on the situation in the country, telling the Senate Armed Services committee that America would need thousands more troops to effectively train Afghan soldiers.

While Thursday’s strike in Afghanistan is in keeping with Mr Trump’s previous statements that his main foreign policy objective is to defeat Islamic State, the United States is also struggling with a resurgent Al-Qaeda.

Thursday’s attack comes a week after US president Donald Trump ordered the first US military strike against the Syrian regime, ordering 59 Tomahawk missiles to hit a military airfield in the west of the country.

In his first international media interview since the US strike, ordered in retaliation for an April 4th chemical attack in the Syrian city of Khan Shikhoun, Syrian leader Bashar al-Assad said that reports that his regime was behind the attacks were “100 per cent fabrication.”

“Our impression is that the West, principally the US, is colluding with terrorists, and that it made up this whole story to serve as the pretext for an attack,” he told news agency AFP in an interview in Damascus. He said that he would permit an investigation “only if it is impartial and we are assured that impartial countries will take part.”

Russia has called for an independent investigation into the April 4th chemical attacks, with Russian foreign minister Sergei Lavrov claiming that Russia had seen “no hard evidence” that a chemical attack had taken place.

His comments, delivered alongside US Secretary of State Rex Tillerson on Wednesday following a series of meetings in Moscow, puts Russia and the United States sharply at odds, with the US accusing the Assad regime of perpetrating the sarin gas attacks last week.

Meanwhile, an American-led air strike against Islamic State in Syria on Tuesday led to the killing of 18 Syrian fighters who were allied to the United States it has emerged. It follows controversy over an attack last month in Mosul which led to 200 civilian deaths.

The strike on Tuesday had been requested by allies on the ground near Tabqah, who mistakenly identified a targeted area as a haven for Islamic State. It was in fact inhabited by the Syrian Democratic Forces who are fighting the terrorist group. It is not yet clear if American planes, or other coalition allies, were involved in the strike.