US joins Nato allies in closing ranks against Russia 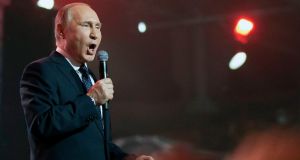 Russian president Vladimir Putin: Donald Trump also signed on to an unusually strong statement that accused Russia of being behind the “first offensive use of a nerve agent in Europe since the second world war”. Photograph: Alexander Zemlianichenko/AFP/Getty Images

Nato’s leading powers closed ranks against Vladimir Putin on Thursday as the US unveiled new sanctions against Moscow and joined with France and Germany to back Britain’s accusations against the Kremlin for the poisoning of a former Russian spy on UK soil.

The Trump administration appeared to shed its ambivalence towards Moscow by sanctioning five groups and 19 individuals, accusing them of staging a series of cyber attacks in on US energy, nuclear and aviation infrastructure, the toughest measures taken since Donald Trump took office.

Mr Trump also signed on to an unusually strong statement that accused Russia of being behind the “first offensive use of a nerve agent in Europe since the second world war” in the attempted murder of former double agent Sergei Skripal and his daughter in Salisbury on March 4th.

The communiqué – which was joined by Britain’s Theresa May, Germany’s Angela Merkel and France’s Emmanuel Macron – warned that the nerve agent attack was a “breach of international law. It threatens the security of us all.”

The statement said Washington, Paris and Berlin “share the UK assessment that there is no plausible alternative explanation” for the attack, providing important diplomatic backing to Ms May in her stand-off with Moscow.

Although most of the sanctions unveiled by the US targeted those charged last month with attempting to disrupt the 2016 presidential election, treasury secretary Steven Mnuchin broadened the accusations against Russians for what he called “nefarious attacks”.

Though not directly co-ordinated, the international actions reflected growing unease in western capitals over an apparent but unexplained increase in aggressive activity by the Kremlin in the months leading up to Sunday’s Russian presidential election. One French diplomat warned that Moscow seemed willing to clash with the West.

“Whatever the reason behind the [poisoning] , it’s a provocation, there’s a willingness to cause a public backlash,” the diplomat said. Outgoing US secretary of state Rex Tillerson warned this week of a “pivot to be more aggressive” by Russia, and a “certain unleashing of activity that we don’t fully understand”.

Even Mr Trump for the first time blamed Moscow for the attack on Mr Skripal, telling reporters at the White House: “It certainly looks like the Russians were behind it.” The US was in “deep discussion” with allies over how to respond, he added.

Russia on Thursday signalled it was preparing to expel British diplomats and take other retaliatory measures a day after Ms May said Britain was ejecting 23 Russian embassy staff she believed to be spies, the biggest such move by the UK for 30 years.

In its statement, the US treasury said Russian government hackers had since 2016 targeted US government entities and “multiple US critical infrastructure sectors” – including energy, nuclear, commercial facilities, water, aviation, and manufacturing.

A senior national security official said the US had discovered the hackers had conducted network reconnaissance on the systems that run US factories and America’s energy grid. The breach of the grid has alarmed national security agencies and bears out long-held concerns at the Pentagon that Moscow will seek to disable critical US infrastructure.

Among the entities targeted by the treasury sanctions are the Federal Security Service, Russia’s domestic intelligence agency, as well as its military intelligence directorate, the GRU.

The sanctions hit the three entities and 13 Russian individuals indicted by special counsel Robert Mueller last month for interference in the 2016 presidential election. Among them is the Internet Research Agency (IRA), an organisation accused of being a “troll farm” that spreads propaganda and disinformation.

In February, Mr Mueller charged the IRA and linked companies and individuals with operating a well-funded propaganda campaign from within the US to “sow discord” and support the Trump presidential campaign while attacking Democratic rival Hillary Clinton.

The IRA and its employees allegedly acquired US identities and posed as Americans while using Facebook and other social media to organise political rallies and spread information about divisive social and political issues. The treasury’s announcement on Thursday echoed Mr Mueller’s indictment and said the IRA had sought to “interfere with the 2016 US election”.

Among the sanctioned individuals is Yevgeny Prigozhin, who the treasury said funded the IRA’s interference in the presidential election. Mr Prigozhin has been dubbed “Putin’s chef” as his company Concord, also sanctioned on Thursday, has catering contracts with the Kremlin. Mr Prigozhin was previously targeted by the US in 2016 as part of sanctions related to Russia’s invasion of Ukraine.

“The administration is confronting and countering malign Russian cyber activity, including their attempted interference in US elections, destructive cyber attacks, and intrusions targeting critical infrastructure,” said Mr Mnuchin in a statement.

“These targeted sanctions are a part of a broader effort to address the ongoing nefarious attacks emanating from Russia. Treasury intends to impose additional . . . sanctions, informed by our intelligence community, to hold Russian government officials and oligarchs accountable for their destabilising activities by severing their access to the US financial system.” – Copyright The Financial Times Limited 2018