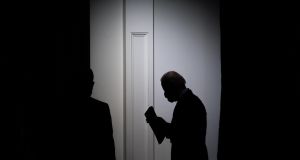 US president Joe Biden leaves after speaking about an initiative to help small businesses threatened by the pandemic. Photograph: Saul Loeb/AFP via Getty

Flags will be flown at half mast on federal buildings for five days in the United States as the country remembers the 500,000 lives lost to the Covid-19 pandemic so far.

President Joe Biden was due to make the announcement on Monday night at a candlelit ceremony at the White House to mark the US passing the grim milestone.

Mr Biden has criticised his predecessor Donald Trump for his handling of the pandemic, stating on Friday that Mr Trump had “failed to order enough vaccines, failed to mobilise the effort to administer the shots, failed to set up vaccine centres”, and that had changed “the moment we took office”.

About 1.7 million vaccines a day are now being administered in the US. However, White House Covid expert Andy Slavitt said on Monday that the seven-day average of vaccines administered in Texas had decreased by 31 per cent in the past week due to the recent winter storm.

House speaker Nancy Pelosi said that the 500,000 deaths milestone marked “an horrific human toll of staggering proportions and incomprehensible sadness. Every life lost is a profound tragedy that we mourn and that breaks America’s heart.”

As Mr Biden on Monday made the case for his $1.9 trillion Covid relief plan, he also unveiled details of a revised support programme for small businesses, which will be tailored for companies with fewer than 20 employees.

Since the pandemic began, he said, “400,000 small businesses have closed – 400,000 – and millions more are hanging by a thread”, noting that “mom-and-pop” businesses were “muscled out of the way by bigger companies” during Mr Trump’s small business programme last year.

On Monday Mr Biden’s nominee for attorney general, Merrick Garland, appeared before the Senate judiciary committee. Mr Garland, whose nomination by President Barack Obama was effectively blocked by Republicans following the death of Antonin Scalia in 2016, became emotional when he spoke about his family’s history.

“I come from a family where my grandparents fled anti-Semitism and persecution. The country took us in and protected us.” He said he wanted to pay the country back.

Under questioning by senator Ted Cruz, who made his first public appearance at the US Capitol since his controversial trip to Mexico last week, Mr Garland said that, as attorney general, he would not regard himself “as anything other than the lawyer for the people of the United States” and would not be “the president’s lawyer”.

The Senate was expected to vote on Linda Thomas-Greenfield’s nomination as US ambassador to the United Nations later on Monday. But Mr Biden’s nominee to lead the Office of Management and Budget, Neera Tanden, appeared to be in trouble, after some key senators said they would oppose her nomination.

She continued: “She’s tested. She’s a leading policy expert. She’s led a think tank in Washington ... She has won widespread support and endorsements ranging from labour unions to the US chamber of commerce. And she has rolled up her sleeves and done the work.”