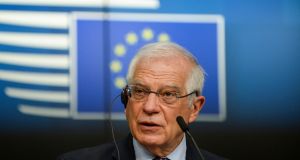 Russians who were responsible for the “arrest, sentencing and persecution” of Kremlin critic Alexei Navalny are set to be hit by European Union sanctions in the bloc’s first use of the Magnitsky Act.

Member states gave the “green light” to the sanctions when they met in Brussels on Monday, Minister for Foreign Affairs Simon Coveney told reporters.

The measures are expected to slap entry bans and asset freezes on four Russian officials, according to diplomats, who said the member states had given EU foreign affairs chief Josep Borrell the task of drawing up a list of names.

The sanctions are expected to take effect after EU leaders sign off on them when they meet next month.

Mr Coveney said the sanctions would be “targeted”, and they are expected to hit people directly linked to his treatment rather than Russian oligarchs, to the disappointment of supporters of Mr Navalny.

The move comes after an ill-fated trip by Mr Borrell to Moscow earlier this month in which hopes of rekindling a closer relationship with Russia were met with the expulsion of EU diplomats and a press conference in which Russian foreign minister Sergei Lavrov criticised the EU as “an unreliable partner”.

The incident led to calls for Mr Borrell to resign as the trip was seen as ill-judged and an embarrassment for the bloc. But Mr Coveney said the EU had moved on from the incident and had a common front.

“What the EU is not going to do is allow a difficult and hostile meeting in Moscow to undermine EU unity in relation to how we approach the relationship with Russia,” Mr Coveney told reporters.

“The EU wants a better and structured relationship with its large neighbour, but certainly the behaviour of Russia during the visit makes that more difficult.”

Mr Borrell told reporters that Russia was “drifting towards an authoritarian state” and that it “seems to have decided to act as an adversary”.

The sanctions would be the first time the EU has used a newly-established sanctions regime that allows the member states to act against people it holds responsible for human rights abuses through travel bans and asset freezes. The measures add to previous sanctions placed on six individuals and one organisation following the poisoning of Mr Navalny last year.

The EU foreign ministers also agreed to closer co-operation with the United States when it comes to China, after an EU-China investment deal drew criticism from the European Parliament and Washington.

During the meeting, the foreign ministers held a video conference with Antony Blinken, the new United States secretary of state under President Joe Biden.

The two sides “agreed to co-operate much closer when it comes to China in the future”, Germany’s foreign minister Heiko Maas said.

In addition, the bloc is to move towards sanctions on Myanmar in the wake of a military coup.

The EU council of ministers issued a statement condemning the coup “in the strongest terms” while stressing that “the EU stands with the Burmese people”. Mr Borrell said the bloc would introduce sanctions targeted to hit the military and its economic interests.