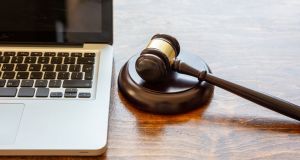 The report, on technological change and the legal sector, also warned that artificial intelligence (AI) software designed to introduce efficiencies in the justice system could ‘learn’ to discriminate in ways that are illegal. Photograph: iStock

Remote court hearings, which have come to “rapid and unexpected prominence” as a result of the Covid-19 pandemic, “fall short of the full experience of a real courtroom”, according to a report prepared for the Oireachtas.

The report, on technological change and the legal sector, also warned that artificial intelligence (AI) software designed to introduce efficiencies in the justice system could “learn” to discriminate in ways that are illegal, focusing on characteristics that are proxies for social class, race or gender.

Very little research has been conducted nationally or internationally on the sudden pivot to remote hearings, according to the report, by Dr Rónán Kennedy of NUI Galway.

Since the pandemic started, the Courts Service has held thousands of remote court sittings, often for such matters as case management and new applications, but also for full hearings in some areas, including family law. Jury trials are not being held remotely.

A survey in England and Wales by the Civil Justice Council found the majority of lawyer respondents “felt that remote hearings were worse than hearings in person overall”, according to Dr Kennedy’s report, Algorithms, Big Data and Artificial Intelligence in the Irish Legal Services Market.

The English survey found that most lawyers were happy with their experience of remote hearings, though they found them to be more tiring.

They said that facilitating media access to remote hearings “was being treated as synonymous with, or equivalent to” satisfying the requirement that justice be done in public.

An English review of remote family law hearings found concerns that by reducing face-to-face contact they made it difficult to “read reactions and communicate in a humane and sensitive way”.

A similar review in Northern Ireland by Ulster University concluded that remote hearings in family courts were better than no hearings at all, “but are not yet able to deliver access to justice”.

Dr Kennedy’s report notes that introducing technology without considering the physical layout of courtrooms “may undermine perceptions of justice”.

“The court is a ritual experience as much as anything,” said Dr Kennedy. “The way a courtroom is laid out, the way certain areas are elevated, is important.” The trappings of the court setting may be “dehumanising in a positive way”.

The report covers such topics as the ability of technology to reduce legal costs and replace some of the work done by solicitors, as well the potential need to make AI design a profession, so as to promote knowledge of the law, ethics and “the social implications of technology”.

Technology could improve access to justice, but also boost the “digital divide” – the gap between those most able to negotiate technology and those least able to – and contribute to an “algorithmic divide” between those who understand the importance of algorithms, and those who do not.

Dr Kennedy was awarded a Science Foundation Ireland fellowship to carry out the research as part of a series that gives TDs and Senators in-depth briefings on particular topics.

His report sets out the pros and cons of software for legal services as against advocating or arguing against different policies.

In the future, judges are unlikely to be entirely replaced by AI, “but we may see hybrid human-machine systems used for judging”.