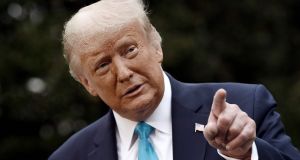 The US supreme court has rejected Donald Trump’s efforts to block a New York prosecutor from obtaining his tax records, in a big blow to the former president as he grapples with several criminal probes.

The supreme court’s order on Monday clears the way for Cyrus Vance, the Manhattan district attorney, to enforce a subpoena for Mr Trump’s tax returns, which he has long fought.

The tax records are unlikely to be made public as part of the district attorney’s investigation into Trump and the Trump Organization. That investigation has broadened since it began in 2018 in response to reports that his former lawyer, Michael Cohen, had arranged hush-money payments for two women who claimed to have had extramarital affairs with Mr Trump.

Mr Trump has long opposed releasing his tax returns, claiming since he first ran for president in 2015 that he could make them public because his tax affairs were under audit by the Internal Revenue Service. The IRS, however, has said there was no rule preventing returns that were still under audit from being shared with the public.

After obtaining nearly two decades worth of Mr Trump’s tax information last year, the New York Times reported Mr Trump paid just $750 a year in federal income taxes in 2016 and 2017, and no income tax at all in 11 of 18 years reviewed.

Last July the court said Mr Trump, then president, did not have immunity from the Manhattan criminal investigation, but temporarily blocked similar subpoenas issued by Congress, where Democratic lawmakers have also tried to get copies of his tax records since the 2018 midterm elections.

The latest decision underscores the mounting legal woes facing the former president even after his acquittal in a Senate impeachment trial earlier this month over his role in the January 6th siege on the US Capitol.

Mr Trump is also the subject of a criminal investigation in Georgia, where the district attorney in Fulton county is probing his efforts to overturn the result of the presidential election there.

The attorney-general in the District of Columbia has not ruled out charging Mr Trump for his role in the January 6th riots that interrupted the certification of Joe Biden’s electoral college victory and left five people dead.

Last week the NAACP, a prominent civil rights organisation, also filed a federal lawsuit against Mr Trump for his actions on January 6th.

A Trump spokesperson did not immediately respond to a request for comment.

Mr Trump, who has been banned from nearly all social media platforms, has largely stayed out of the public eye since he snubbed Mr Biden’s inauguration last month. However, he has released several written statements in recent days, including a blistering attack on fellow Republican Mitch McConnell, who has castigated the former president for his role in the January 6th siege.

Mr Trump has not ruled out running for president again in 2024. He is expected to make his first big appearance this coming weekend at the Conservative Political Action Conference, an annual meeting taking place in Orlando, Florida. – Copyright The Financial Times Limited 2021