Deal between Iran and nuclear watchdog puts pressure on Biden 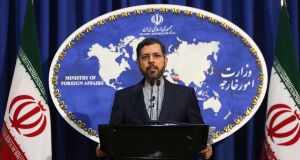 An agreement between Tehran and the global nuclear watchdog has postponed a potential crisis over Iran’s decision to reduce monitoring of its nuclear facilities.

The deal suspends snap inspections by the International Atomic Energy Agency (IAEA) but extends routine surveillance for three months in accordance with the 2015 accord limiting Iran’s nuclear programme in exchange for lifting sanctions.

Iran has taken this action to put pressure on US president Joe Biden to honour his pledge to rejoin the accord. He has, however, complicated the process for rescuing the deal by insisting that Iran must be first to resume compliance.

Iran argues it abided by the deal for a year after ex-president Donald Trump withdrew the US and imposed harsh sanctions which, Tehran charges, amount to “economic warfare”.

Mr Biden’s hesitation has increased Iran’s distrust of the US. He was vice-president in the Obama administration that negotiated the agreement but failed to end US secondary sanctions that threatened to punish foreign governments, banks, and firms for investing in or doing business with Iran.

Iran is not alone in feeling impatience with the Biden administration. Britain, France and Germany, the three European parties to the nuclear deal, convinced US secretary of state Antony Blinken to participate in EU-brokered talks with the other signatories, Russia, China and Iran, to resolve the deadlock. Tehran has yet to agree.

This invitation was inspired by Iranian foreign minister Javad Zarif’s call on February 1st for EU foreign affairs chief Josep Borrell to establish a mechanism to synchronise simultaneous US and Iranian compliance.

To achieve this end Iran would have to halt uranium enrichment above the 3.7 level, export its stockpile of enriched uranium, and put high-resolution centrifuges in storage. This would take a few weeks at most.

Mr Biden would have to decree US reinstatement – as he did with US membership in the Paris climate accord – and lift sanctions that cancel Iran’s benefits from the deal.

Since Mr Trump imposed sanctions not tied to the accord, the Biden administration could retain them as leverage in negotiations over Iran’s ballistic missile programme and involvement in Arab affairs.

Time to save the accord may be running out. Iran is set to elect a new president in June to replace moderate Hassan Rouhani, who is determined to revive the deal before he leaves office in August.

Hardline opponents seek to exclude moderates from the presidential race and escape limitations imposed by the deal.

In a gesture designed to convince Iran of its good intentions, the Biden administration has revoked Trump-era restrictions on the freedom of movement of Iranian diplomats accredited to the UN. It is also, however, seeking to pressurise Iran into releasing dual US-Iranian citizens imprisoned for espionage.