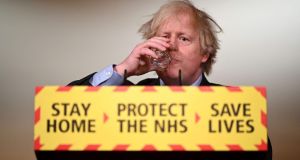 Boris Johnson’s roadmap for lifting lockdown offers a clear timetable and a set of tests which, unless the pandemic takes a catastrophic turn, are certain to be passed. It was well received in the House of Commons, with only a handful of Conservative MPs grumbling about the prospect of four more months of restrictions.

The prime minister was keen to emphasise the cautious nature of his plan, with five-week gaps between each easing of restrictions to test their impact on the spread of the virus. At a Downing Street press conference, the Daily Mail’s political editor suggested that Johnson had become a “gloomster”, asking what had happened to buccaneering Boris.

“The crocus of hope is poking through the frost and spring is on the way both literally and metaphorically but I won’t be buccaneering, as you put it, with people’s lives,” he said.

The crocus of hope is taking its time and although schools and colleges reopen on March 8th, very little else changes until April 12th. At that stage, all shops, hairdressers and gyms can open, along with outdoor hospitality. A month later, indoor hospitality and events return and all legal social distancing requirements will be lifted.

Two reviews along the way will determine whether restaurants and bars can abandon the 1.5 metre rule and whether private businesses can require proof of Covid status before admitting customers. Johnson defended the stately pace of the removal of restrictions on the basis that he wanted each step to be irreversible and that this must be the last lockdown.

The word from inside Number 10 is that the prime minister has indeed become something of a gloomster, advocating a more cautious approach than his colleagues. What some Conservatives fear is that by waiting until the summer to fully open up the economy, he is in danger of throwing away the competitive advantage offered by Britain’s remarkably fast vaccine rollout.

Other European countries are struggling with inadequate vaccine supplies and popular resistance to the Oxford/AstraZeneca vaccine which has seen huge numbers of missed vaccination appointments in Germany. But increased production will ease vaccine supply problems and most EU member states can expect to reopen their economies by the summer.

It would be a gloomy irony if, after one of the earliest and most successful vaccine rollouts in the world, Johnson’s newfound caution should see Britain reopening as late as everyone else in Europe after the toughest lockdown and the greatest death toll.