US firms can deny workers insurance coverage for contraception 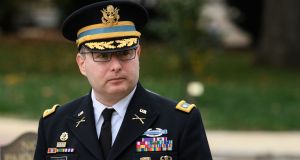 Lieut Col Alexander Vindman: Having testified about Donald Trump’s Ukraine policy during the impeachment inquiry, he is retiring after a “campaign of bullying, intimidation and retaliation” since. Photograph: Mandel Ngan

The Trump administration received a boost on Wednesday after the supreme court upheld a rule allowing employers to deny workers insurance coverage for birth control.

Though the Affordable Care Act introduced by President Barack Obama had allowed some religious groups and churches to limit access to contraception coverage on religious grounds, the Trump administration had significantly expanded the pool of employers that could avail of the exemption.

Pennsylvania and New Jersey had challenged these 2018 rules, but the supreme court ruled by a 7-2 majority in the government’s favour.

“Ensuring that women receive the healthcare they need does not require banishing religious groups that refuse to surrender their beliefs from the public square,” Ms McEnany said.

The ruling is likely to play well with conservatives four months out from the presidential election. The supreme court, which is approaching the end of its term, is expected to rule on a long-running case on President Donald Trump’s financial records on Thursday.

Separately on Wednesday, Alexander Vindman, the career army officer who testified about Mr Trump’s Ukraine policy during the impeachment inquiry, announced that he was retiring after 21 years of military service.

Mr Vindman’s lawyer said his client had endured a “campaign of bullying, intimidation and retaliation” since testifying and felt that his career path “will be forever limited” because of his action. Mr Trump had already fired Ukrainian-born Mr Vindman from the National Security Council in February as well as his twin brother, who also worked in the administration.

Mr Trump, who is lagging behind former vice-president Joe Biden in the polls ahead of November’s election, tweeted on Wednesday: “THE SILENT MAJORITY IS STRONGER THAN EVER, JUST WATCH!!!”

The White House has dismissed a new book by Mr Trump’s niece, Mary Trump, as “full of falsehoods”. Among the allegations is that the future president paid someone else to sit his SAT (standardised admission text) exams to get into college.

High-profile grandson of Nazi commander convicted of fraud 19:00
British tourists scramble to leave France before quarantine 18:33
UK education secretary under pressure to quit over A-levels ‘fiasco’ 18:19
Israel eyes other Arab nations after establishing ties with UAE 18:15
Hundreds of children returned to Libya from Mediterranean in 2020 17:45