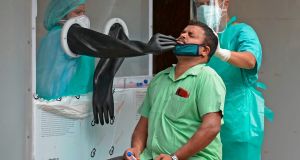 Health officials collect a swab sample from a man to test for Covid-19 at a testing centre in Hyderabad, India. Photograph: Noah Seelam/AFP via Getty Images

A major research effort is under way to understand whether coronavirus can spread through tiny airborne particles that are released by infected people and remain suspended in the air for hours.

Scientists are working alongside sanitary engineers at the World Health Organisation to investigate how tiny aerosols bearing the virus may be released into the environment; whether they are spread around rooms by air-conditioning units; and how infectious the particles may be.

Among the studies being conducted are experiments with caged hamsters to assess whether viruses wafting through the air in hospitals and other high-risk settings are sufficiently potent to spread infections.

In an open letter published on Monday, the scientists implied that the WHO was underplaying the risk of airborne transmission, prompting the organisation to concede that the possibility could not be ruled out, particularly in crowded, enclosed and poorly vented spaces.

But Prof David Heymann, who advises the WHO on infectious hazards, said the organisation needed to see results from well-designed studies before it could consider advice on new strategies for containing the virus.

“It’s ironic that many of the people who signed the letter are contributing to many of the different WHO groups investigating this,” he said during a video conference on Wednesday held by the think tank Chatham House, where he is head of the Centre on Global Health Security.

The key control measures in place for coronavirus, such as physical distancing, regular hand-washing and mask-wearing, are rooted in the assumption that the infection is largely spread by larger droplets ejected from people’s mouths and noses when they cough, sneeze, shout or sing.

These droplets can infect people directly if they contaminate the eyes, nose or mouth, but are thought to fall to the ground within the space of one or two metres. The droplets are also thought to be infectious if they are picked up from doorknobs and other surfaces.

The authors of the open letter believe that a number of outbreaks, including several in meat processing plants, suggest that airborne transmission is important in settings where the virus can build up in the air, or where air is circulated by unfiltered air-conditioning units. If that is the case, further protection is likely to be needed to prevent infections spreading.

“There is a possibility that there’s airborne transmission in closed spaces,” said Prof Heymann. “An air-conditioning unit, especially one on the wall, might be able to pick up an aerosol and put it back out, if it’s not filtered, and circulate it through the room.”

The hypothesis has been put forward to explain a cluster of infections at a Chinese restaurant where people became infected despite being some distance from one another, but there is as yet no hard proof.

Other evidence, however, suggests that airborne transmission is not a major issue. In some countries, such as Switzerland, where lockdown restrictions have been eased and people have returned to restaurants and bars, there has been no increase in transmission.

“There’s evidence in what’s happening that this virus doesn’t act as a virus that would be airborne,” Prof Heymann said. “There are studies going on now and the WHO is waiting to see the results. If there is airborne transmission, we need to better understand it before we can put interventions in place.”

Adding to other scientific studies, the WHO has convened a group of sanitary engineers to investigate what mechanisms may propel virus-carrying aerosols into the air.