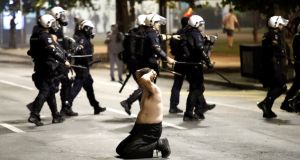 Protesters and police clash outside the parliament building in Belgrade, as Serbian president Aleksandar Vucic announced plans for a return to lockdown amid a surge in coronavirus cases. Photograph: Koca Sulejmanovic/EPA

Serbian president Aleksandar Vucic has accused far-right radicals and foreign security services of sparking violence during a protest in Belgrade against his government’s handling of the coronavirus outbreak.

Several thousand people took to the streets of the capital on Tuesday night, hours after Mr Vucic announced plans to reintroduce a full lockdown in the city this weekend to counter a sharp resurgence of the virus.

The demonstrators accused Mr Vucic of prioritising his own political agenda over the health and welfare of Serbia’s people by dramatically easing coronavirus restrictions before parliamentary elections last month, in what critics decried as a cynical and dangerous public relations exercise to boost his party’s campaign.

Several senior Serbian politicians, including the minister for defence and the speaker of parliament, tested positive for coronavirus in the days after the election, and a number of towns and cities around the country declared a local state of emergency as the number of new cases rose sharply again.

Mr Vucic defended his handling of the health crisis on Wednesday, however, and blamed enemies of his government and of Serbia for clashes that officials said resulted in injuries to 43 police officers and 17 protesters and led to 23 arrests.

“Last night in Belgrade, we witnessed the most brutal political violence in recent years . . . It was not about the coronavirus, it was an unannounced political rally, against the law,” Mr Vucic said.

He claimed that “right-wing and pro-fascist demonstrators” and “regional security services” were to blame for the unrest, which saw a group of protesters briefly break into parliament.

Mr Vucic did not name the country he suspected of involvement, but he is due to resume European Union-brokered talks with Kosovo later this week.

“I have no doubt that those who worked on this last night had the goal of weakening Serbia’s position,” he said. “We will never allow the destabilisation of Serbia from within and abroad.”

In a potential concession, however, Mr Vucic said government officials would finalise in the coming days what measures were needed to control the spread of coronavirus, and they might decide not to impose the planned lockdown in Belgrade.

Mr Vucic also defended the actions of riot police who fired tear gas in response to the throwing of rocks and other missiles. Some officers were caught on film kicking and beating unarmed people with truncheons.

Dunja Mijatovic, human rights commissioner for the Council of Europe, said the “violent dispersal of demonstrators by the Serbian police in Belgrade yesterday raises serious human rights concerns. The Serbian authorities must carry out effective investigations to establish responsibility and punish the officers responsible.”

Serbia reported 357 new cases of the infection on Wednesday and 11 deaths from Covid-19. Officials said 13 people died from the virus on Tuesday, marking the country’s worst one-day death toll.

According to official figures, 17,076 people in Serbia have been infected and 341 have died from the virus, but investigative journalists accuse the government of underreporting both statistics ahead of the election, which resulted in a landslide victory for Mr Vucic’s conservative party.