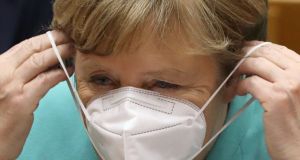 On her first trip outside of Germany since the pandemic took hold, chancellor Angela Merkel headed straight for the European Parliament, where she addressed the rows of MEPs wearing face masks with a fiery plea for unity.

Merkel’s trip to Brussels and meeting with the political representatives of the citizens of the EU is highly symbolic. It comes days after Germany assumed the rotating presidency of the EU Council, meaning Merkel will be chairing debates and trying to forge consensus as the continent confronts the pandemic and an economic downturn it has triggered of historic scale.

The increasing economic divergence between different countries, as some are hit harder and others escape with a lighter impact from the crisis, threatens to put a strain on the union, which relies on evening out disparities between its members.

This has driven Germany to discard its prior economic conservatism to back a €750 billion recovery fund that would funnel billions of euro into member states’ economies, focused on the hardest-hit.

“Our goal is to reach agreement swiftly. We have seen huge economic upheaval and we cannot waste any time, or the poorest will pay the price,” Merkel said.

The recovery plan proposes that money would be given out in grants to fund green and digital investments that would transform economies to be in better shape for the years to come.

But the programme has its sceptics, particularly in the bloc of so-called frugal states led by the Netherlands, who question whether their taxpayers will ultimately end up on the hook. Merkel’s first task is to win them over.

“This is an extraordinary situation, unprecedented in the history of the European Union,” she told parliament, explaining Germany’s support for the plan. “We need European unity.”

In recent days, there has been increasing talk in Brussels of a compromise that could bring together two things: demands by the frugals for checks and conditions on how the money is spent, and concerns about the decline of rule of law in some of the EU’s member states.

Some member states feel that as long as Hungary is on a path to authoritarianism under prime minister Viktor Orban, and the Polish government is abetting a crackdown on LGBT rights and eroding the independence of the judiciary, neither should get a cent of EU money as they are flouting EU norms.

The fact that Poland is due to get one of the biggest chunks of recovery funds under the allocation currently proposed by the European Commission has not gone unnoticed by the plan’s opponents.

Applause broke out among MEPs as Manfred Weber, the leader of the biggest political grouping in the parliament, the European People’s Party, said: “Europe is not a cash machine. Europe is a union of shared values. Rule of law must be respected.”

Like Weber, Orban’s Fidesz party is a member of the European People’s Party, but has been indefinitely suspended.

If money from the recovery fund was made dependent on whether a member state was following the rule of law, who would make that decision and how?

Such oversight is typically the job of the European Commission, which seems to be on board.

“The rule of law should be the condition for distribution of EU money,” Vera Jourova, a deputy head of the executive, said during a meeting with member states’ justice ministers this week.

But there are proposals to strengthen the scrutiny by giving a role to the European Parliament or by making funding contingent on the consent of the leaders of national governments in the European Council.

When it comes to votes by the governments of member states, the same problem lurks: a lack of unity.

As she addressed the parliament, Merkel emphasised that the rest of the world would not wait for Europe.

The post-war world order is in decline, accelerated by the nativist rejection of international co-operation by US president Donald Trump. The EU is facing an increasingly assertive China, and power plays by Russia and Turkey that are undermining stability on its borders, without the iron-clad certainty of the transatlantic alliance to back EU interests.

Merkel warned that “lies and disinformation” had gone viral alongside the pandemic, and that within the EU, there was the risk of a destabilising fallout.

“I believe in Europe, I’m a fervent advocate of Europe, not just as a legacy of the past but as a hope and vision for the future,” Merkel said.

“We must not be naive. In many member states, Eurosceptics are waiting to misuse this crisis to their own ends,” she warned. “We need to demonstrate the added value of European co-operation and co-ordination.”