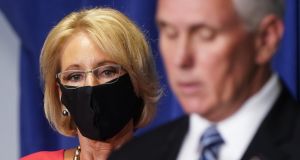 The United States reached a new milestone on Wednesday, reporting three million confirmed cases of coronavirus, the highest of any country in the world.

The official figures from Johns Hopkins University were released as President Donald Trump urged all schools to reopen in the autumn, in conflict with advice from his own federal agency, the Centres for Disease Control and Prevention (CDC).

On Twitter, Mr Trump said he disagreed with the CDC on its “very tough & expensive guidelines for opening schools”, noting that schools in other countries such as Denmark, Germany and Sweden had reopened. Vice-president Mike Pence later confirmed that the CDC would issue new guidelines next week.

Speaking alongside Mr Pence at a White House coronavirus task force meeting, the head of the CDC, Robert Redfield, stressed that the guidelines were only recommendations and should not be seen as a barrier to schools reopening.

States and local authorities in the United States have significant authority over the running and financing of schools across the country.

New York’s mayor Bill de Blasio announced on Wednesday that children in the city would return to school only two or three days a week and would also receive remote tuition.

“We all know remote learning is not perfect, but we’ve also seen a lot of kids benefit greatly from it during these last months and we know we’ll be able to do it even better in the months ahead,” he said. “What we won’t do is ignore the science and recklessly charge ahead like our president.”

The development comes after Mr Trump held an event at the White House on Tuesday, attended by first lady Melania Trump, on school reopenings in which he said he would put pressure on governors and other local officials to reopen them fully in the autumn.

There were more developments in the education sphere on Wednesday, after two of the country’s most prestigious higher education institutions, Harvard and Massachusetts Institute of Technology (MIT), filed a lawsuit challenging the Trump administration’s move this week to expel international students in the US whose classes are moving online in the autumn.

The two institutions launched a suit in Boston seeking a temporary restraining order and permanent injunction to stop the policy, which states that students receiving online-only tuition will not be legally permitted to stay in the US. More than a million non-US citizens received visas to study in the US last year alone.

But in a boost for Mr Trump, the supreme court on Wednesday ruled against two teachers who had brought a religious discrimination case against a Catholic school in California. The court sided with the school by ruling that it had the authority to hire and fire without being sued for discrimination.