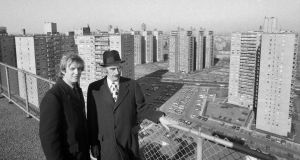 Donald Trump and his father, Fred Trump snr, overlooking some of their properties in Brooklyn in 1973. Photograph: Barton Silverman/New York Times

Mary Trump’s book, Too Much and Never Enough: How My Family Created the World’s Most Dangerous Man, contains stunning claims about her uncle, Donald Trump. Here are eight of the most extraordinary.

Trump allegedly paid someone to take his high school exams

Donald Trump is proud of his attendance at Wharton Business School, at the prestigious University of Pennsylvania. But, according to his niece, he got there by cheating – which he “embraces as a way of life”.

Mary Trump writes: “Donald worried that his grade point average, which put him far from the top of the class, would scuttle his efforts to get accepted. To hedge his bets he enlisted Joe Shapiro, a smart kid with a reputation for being a good test taker, to take his SATs for him. That was much easier to pull off in the days before photo IDs and computerised records.”

Trump also had his older brother, Mary Trump’s father, Fred Trump jnr, put in a good word for him. As she writes, “all of Donald’s machinations may not even have been necessary. In those days, Penn was much less selective than it is now.”

Trump praised his own niece’s breasts

Mary Trump writes about Donald Trump’s treatment of women, including how, when she was briefly working as his ghostwriter, he provided “an aggrieved compendium of women he had expected to date but who, having refused him, were suddenly the worst, ugliest and fattest slobs he’d ever met”. She includes Madonna and the ice skater Katarina Witt as two of the women he named.

The author also says that at Donald Trump’s Florida resort Mar-a-Lago in the 1990s her uncle saw her in a swimsuit and said: “Holy shit, Mary. You’re stacked.” Mary Trump writes that Trump’s then wife, Marla Maples, responded with “mock horror, slapping him lightly on the arm”.

“I was 29 and not easily embarrassed,” she writes. “But my face reddened and I suddenly felt self-conscious. I pulled my towel around my shoulders.”

Donald Trump’s sister appears to be a key source

Maryanne Trump Barry retired as a US federal judge in 2019, thereby ending an inquiry into family tax schemes. Mary Trump’s uncle Robert, Maryanne’s brother, has attempted to stop his niece’s book in court, but in her acknowledgments the author thanks her aunt “for all of the enlightening information”.

Mary Trump details a call from the president to his sister, who told him his performance in office was “not that good”. Donald Trump did not take that well, his niece writes, and began to ignore his sister’s advice.

Mary Trump isn’t sure if her aunt, whom she calls “older, smarter and more accomplished” than Donald, spoke to the New York Times for its reports about Trump family tax affairs, which won a Pulitzer prize.

She does write that her aunt “knew where the bodies were buried” because she and her siblings “had buried them together”.

But Mary Trump details how she herself came to help the paper. She had been unwilling. But one of the reporters, she writes, told her she had a chance to help “rewrite the history of the president of the United States”, an offer she decided to take after watching “our democracy disintegrating and people’s lives unravelling because of my uncle’s policies”.

In one riveting passage Trump describes how she obtained and drove away from the firm Farrell Fritz “19 boxes” of financial information, then handed them over.

“The three reporters were waiting for me,” she writes. “When I showed them the boxes there were hugs all round. It was the happiest I’d felt in months.”

At a Father’s Day celebration at Trump Tower in 1998, while the president was still married to Maples, Mary Trump met her uncle’s new girlfriend, then known as Melania Knauss.

Struck by her silence, she recalls her uncle Robert Trump telling her that Knauss, a model from Slovenia, stayed quiet not because her English was bad but because she “knows what she’s there for”.

Donald Trump, Mary Trump writes, told Melania about how he hired his niece to write The Art of the Comeback (a project from which Mary Trump says she was fired) because she had her own “‘back from the brink’ redemption story”.

“You dropped out of college, right?” she says her uncle asked, adding: “It was really bad for a while – and then she started doing drugs.”

Mary Trump denied that, she said, but she writes that she understands now that her uncle “loved comeback stories, and he understood that the deeper the hole you crawled out of, the better billing your triumphant comeback would get”.

“He probably believed his version of events,” she writes.

Trump Christmases could be tough

“Where had this thing come from?” Mary writes. “Had it been a door prize or a party favour from a luncheon?

“Donald came through the pantry from the kitchen. As he passed me, he asked, ‘What’s that?’

Mary Trump also says that in 1977, when she was 12, her Christmas present from Donald and Ivana was a $12 pack of underwear. Her brother got a leather-bound journal, two years out of date. Later, Mary received a Cellophaned gift basket, “an obvious regift” containing olives and a salami but not one evidently removed item, which a cousin said was “probably caviar”.

Family Christmases were fraught with tension, she says, including Donald and Robert berating their mother, Mary MacLeod Trump, for cooking beef instead of turkey.

“Gam,” she writes, “spent the whole meal with her head bowed, hands in her lap.”

In 2009 Mary Trump attended the wedding at Trump’s Bedminster golf course, in New Jersey, of her cousin Ivanka Trump and Jared Kushner. Kushner is Jewish, and Donald Trump stood “awkwardly in a yarmulke”, she writes. The groom’s father, Charles, gave a speech in which he said Ivanka had only made herself worthy of inclusion in his family by committing to convert to Judaism.

Mary Trump was unimpressed: “Considering that Charles had been convicted of hiring a prostitute to seduce his brother-in-law, taping their illicit encounter, and then sending the recording to his sister at his nephew’s engagement party, I found his condescension a bit out of line.”

Too Much and Never Enough deals extensively with the emotional abuse of a household topped by an absent father and an ill, neglected mother. Mary Trump contends that Fred Trump snr’s many failings – ultimately, his being a “high-functioning sociopath” – weighed heavily on all his children, including her father, Fred Trump jnr, who died from illness arising from alcoholism in 1981.

“Having been abandoned by his mother for at least a year,” she writes, “and having his father fail not only to meet his needs but to make him feel safe or loved, valued or mirrored, Donald suffered deprivations that would scar him for life [and acquired] personality traits [including] displays of narcissism, bullying, [and] grandiosity”. – Guardian