US election: Joe Biden develops a socialism problem with Latinos

Democratic candidate Joe Biden has called for the public to stay calm as the votes are counted and said he has “no doubt” he will win the presidency. Video: Reuters 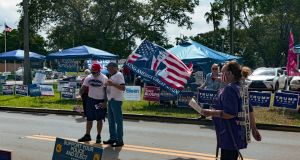 In the final weeks before the November 3rd election, Joe Biden’s campaign realised it had a problem in Florida: socialism.

As campaign staffers descended on the Sunshine State, they saw that Donald Trump had succeeded in using his hardline foreign policy positions to broaden his support among Cuban-American and Venezuelan-American voters who had fled autocratic regimes before settling in Florida.

The president cast himself as the defender of the American dream against the threat of a “socialist nightmare” during rallies in Florida. He called his Democratic challenger a “puppet of Castro-Chavistas” and claimed a Biden administration would turn the US into communist Cuba or socialist Venezuela.

“The fear among Cubans, Colombians, Venezuelans, is the new ‘S’ word – it’s socialism,” said Tony Suarez, executive vice-president of the National Hispanic Christian Leadership Conference and a “faith” adviser to the Trump administration.

The results became clear on election day. Biden dramatically lagged previous Democratic candidates in Miami-Dade, a Florida county where more than two-thirds of people identify as Hispanic or Latino.

During her unsuccessful run for the White House in 2016, Hillary Clinton won the county by 30 percentage points. By contrast, Biden eked out a seven-point win, a margin that doomed him in Florida as Trump ran up his tallies in more rural parts of the state to win its 29 electoral votes.

“The Trump campaign has been working Hispanic voters in Florida and Miami-Dade for the last five years, and the Biden campaign has been working them, in earnest, for the last seven weeks,” said Fernand Amandi, a Miami-based Democratic pollster who published a poll in early September showing Trump gaining ground among Hispanic voters in Miami-Dade.

“It was a significant effort by the Biden campaign in the last seven weeks, but it was too little, too late.”

Trump’s charm offensive in the Latino community was underscored in February when he saluted Juan Guaidó, the Venezuelan opposition leader who the US and some others recognise as the country’s president, during his State of the Union speech.

Paul Angelo, a Latin American expert at the Council on Foreign Relations, said efforts to win over Latino voters in south Florida animated both the Trump administration’s hardline policy on Venezuela – which included punitive sanctions aimed at regime-change – and its move away from Obama-era engagement in Cuba.

The question facing Democrats is whether Biden’s disappointing performance in Miami-Dade raises broader questions about their party’s appeal among Latinos, an ethnically and ideologically diverse voting bloc that is the fastest-growing demographic group in the US.

Chuck Rocha, a consultant who helped Bernie Sanders win a large share of Hispanic votes in the Democratic primary race against Biden, said Democrats needed to ask whether they had done enough to court Latino votes in not only Florida, but also places like Texas, where Biden underperformed with Hispanic communities along the Rio Grande. Trump won Texas’s 38 electoral college votes by a six-point margin.

“There has to be a Latino autopsy done, especially down ballot,” Rocha said, referring to several Latino-majority congressional districts where Democrats lost on Tuesday. “If anything we learned last night that [these] are dramatically different states [from each other].

“This universe of people needs to be persuaded,” he added. “It’s not somebody you just show up and start talking to at the last minute.”

In the final days of campaigning, the Biden team launched a last-minute push in southeast Florida, sending former president Barack Obama to Miami twice in the space of a week.

Trump – who changed his official residence last year from New York to Florida – led a rally late Sunday night in Miami, the final stop in a packed weekend of appearances in swing states.

Armando Ibarra, president of the Miami Young Republicans, said rallies involving Trump and his supporters galvanised Latino voters who were looking for a bright spot in a year coloured by the coronavirus pandemic.

“The Trump campaign, this movement, it was fun. We were having rallies and caravans every weekend and people looked like they were having fun,” he said. “That resonated with voters down here. They felt the energy and the excitement and the happiness of the movement.”

“In contrast, Biden was talking about dark winter,” he added, referring to Biden’s comments at the final presidential debate warning that the coronavirus pandemic would worsen in the coming months.

“Hispanic voters and the Hispanic electorate is a very visceral, touchy-feely community,” he said. “They wanted to be courted, they want to be engaged and sometimes they want to literally be danced with.”