The Donald Trump years: his presidential story – so far 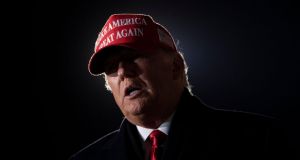 Trump inaugurated as the 45th president of the United States. His presidential rival Hillary Clinton is among those in attendance, along with husband Bill. The size of the crowd becomes a source of controversy after press secretary Sean Spicer declares in one of his first White House press briefings that Trump drew “the largest audience ever to witness an inauguration, period”. Pictures show this assertion to be false.

President Trump signs an executive order halting immigration from seven mostly-Muslim countries. Chaos ensues at airports and protests erupt across the country. The ban is subsequently challenged by several courts.

Trump’s appointee as national security adviser, Mike Flynn, resigns following a deluge of media reports alleging that he had undisclosed contacts with Russian officials during the transition period.

Trump’s nominee for the supreme court, Neil Gorsuch, begins the first day of confirmation hearings at the US senate. He is subsequently confirmed as the ninth member of the court on April 7th.

Trump fires FBI chief James Comey. The White House publishes a letter outlining the reasoning behind the decision, citing attorney general Jeff Sessions and his deputy Rod Rosenstein. Comey learns about his dismissal from a TV report during a visit to LA. While the Trump administration insists the move is in response to Comey’s handling of the Hillary Clinton email scandal, critics believe it is part of a move by the president to obstruct justice by curtailing the ongoing investigation into Russian election interference.

The deputy attorney general appoints Robert Mueller as special counsel to lead an investigation into possible links between the Trump campaign and Russia as part of a wider probe into Russian meddling in 2016 election.

Trump announces America’s withdrawal from the Paris Climate Agreement, joining Syria and Nicaragua as the only countries not to sign the 2015 accord, though Nicaragua announces it is signing up in October.

Senator John McCain makes an emotional appearance at the senate, 10 days after undergoing brain surgery, to cast his vote on healthcare bill. In a passionate speech to a packed chamber he urged his colleagues to embrace bipartisanship. “We’re getting nothing done my friends,” he says. Two days later, Mc Cain refuses to vote with his party in a dramatic late-night vote. The Republican plan to repeal and replace Obamacare lies in tatters.

Trump says any threat from North Korea will be “met with fire and fury like the world has never seen” dramatically increasing tension with the nuclear state.

Trump suggests that both sides are to blame for a neo-Nazi demonstration in Charlottesville convened to oppose the removal of a confederate statue and which left one woman dead. His remarks are criticised across the political divide.

Trump’s chief strategist, Steve Bannon, resigns, the latest in a series of high-profile departures from the West Wing. He immediately returns to Breitbart News, the right-wing website he edited before the election.

Trump announces the end of the Daca, the Deferred Action on Childhood Arrivals scheme that gave protection to undocumented minors who had been brought to the US as children. While he announces plans to terminate the Obama-era rule within six months, he charges Congress with coming up with an alternative in the meantime.

Trump recognises Jerusalem as the capital of Israel, breaking with most of the western community.

Government shuts down for three days.

Secretary of state Rex Tillerson removed from his position.

FBI agents raid the home, office and hotel room of Trump’s long-term lawyer, Michael Cohen, in New York, on the instruction of the special counsel. He is subsequently sentenced to three years in prison on December 12th.

Trump pulls out of the Iran nuclear deal negotiated by his predecessor Barack Obama and other countries in 2015.

US embassy moves from Tel Aviv to Jerusalem in a win for Benjamin Netanyahu’s government.

After enormous public pressure, Trump signs an executive order after outrage over the policy of separating children from their parents at the US-Mexico border.

At a press conference in Helsinki with Vladimir Putin, Trump appears to take the side of the Russian leader over the findings of his own intelligence services over Russian interference.

Gunman opens fire in a synagogue in Pittsburgh, killing 11 people.

Mid-term elections. Democrats win control of the House of Representatives, but the Senate remains in Republican control.

Trump meets Kim Jong-un for a summit in Hanoi, but leaves early after failing to strike a deal.

A photo of a father and infant child drowned while trying to cross the Rio Grande puts Trump’s immigration policy back into focus.

Trump postpones trip to Denmark following reports that he intended to buy Greenland.

Mike Pence makes first official visit to Ireland as vice-president. Trip proves controversial over question marks over his decision to stay in the president’s hotel in Doonbeg.

While participating in the UN General Assembly in New York details of a phone call between Trump and the Ukrainian president Volodymyr Zelensky emerge. House speaker Nancy Pelosi warns that impeachment is on the table.

US launches military strike to take out influential Iranian figure Qassim Suleimani as he arrives in Iraq.

Trump acquitted of two charges in impeachment. Only one Republican candidate – Mitt Romney – votes to remove the president on one count.

Trump announces a travel ban and a few days later declares a national emergency as covid-19 begins to spread in America.

At a coronavirus taskforce at the White House, Trump suggests that ingesting bleach could be a cure for coronavirus, prompting censure from medical experts across the globe.

Democrats postpone their national convention until August as the covid crisis impacts the election campaign. The Democratic party coalesce around former vice-president Joe Biden as their candidate, and he is officially confirmed in August.

Trump holds Republican National Convention at the White House, prompting accusations that he is violating the Hatch Act which prohibits public officials from electioneering. Rather than adopt a policy platform of priorities for the coming four years, the Republican National Committee instead says it will “enthusiastically support” the president’s America-first agenda – a measure of how far the Republican party has become the party of Trump.

Death of Ruth Bader Ginsburg announced. The liberal icon’s death opens up a vacancy on the nine-member court less than two months before an election.

Trump refuses to commit to a peaceful transfer of power if he loses the election. “We’ll have to see,” he says in reply to a question at a White House press conference.

Amy Coney Barrett (48) is sworn-in as supreme court justice – Trump’s third nomination to the court. She joins the bench a week before the presidential election.

Millions of Americans go to the polls to elect the 46th president of the United States, but almost 100 million people have already cast their vote before election day as states greatly expand early voting options due to coronavirus.