Protests have taken place across America following Donald Trump’s aggressive effort to challenge the vote count in the US presidential election. Video: Reuters 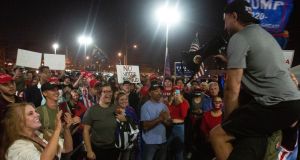 Authorities across the US are preparing for more protests after demonstrators took to the streets on Wednesday night in numerous cities following Donald Trump’s call to halt vote-counting in critical swing states that could determine the outcome of the presidential election.

Mr Trump has made unsubstantiated claims of voter fraud in some of the states where votes are still being tallied.

Extremism experts have flagged the risk of electoral violence for weeks, citing a recent rise in extremist groups, online campaigning, political polarisation, a high-stakes election and the impact of duelling rival protests over the summer in the wake of the killing of George Floyd, some of which turned violent.

Tensions have ratcheted higher as the vote count drags on days after polls closed on Tuesday night. Among the incidents on Wednesday night was an attempt by a group of pro-Trump armed protesters to disrupt operations at an election counting centre in Arizona, where votes are still being counted.

County sheriff deputies blocked the entry of the Maricopa county elections office in Phoenix as a group of about 75 people, some of them armed and many carrying signs supporting the US president, gathered outside the building on Wednesday evening chanting “Stop the steal!”.

A Republican Arizona congressman Paul Gosar, who has previously alleged electoral irregularities, also attended the protest. He tweeted: “We haven’t come this far and fought this hard to have the election stolen from us.”

The AZ Patriots, which bills itself as an activist “Maga” group – named after Mr Trump’s “Make America Great Again” slogan – posted a video of the Phoenix incident on its Facebook page, saying: “We don’t lay down and take it ... We fight for Arizona!” It added the situation became “hostile” after AZ Patriots showed up to the protest requesting access to the election centre.

Local sheriff deputies cordoned off the facility to ensure operations continued and county election officials vowed to continue the count.

“Acts of violence, threatening behaviours or criminal damage of property will not be tolerated,” said Maricopa sheriff Paul Penzone in a statement following the incident.

Small crowds of Trump supporters also protested at precincts where votes were being tallied in Detroit, with the Associated Press calling the state of Michigan for Democratic challenger Joe Biden.

Police made 11 arrests in Portland after 300 anti-Trump protesters gathered overnight across the Oregon city, with some reports of damage. Oregon’s Democratic governor, Kate Brown, extended a state of emergency for Portland to November 6th, while the Oregon National Guard activated 46 soldiers to support local law enforcement.

Stand Up America, a nationwide coalition of grassroots activists who want to oust Mr Trump, has so far put on hold planned nationwide protests events to “Protect the Results”. But hundreds of local events have taken place, and organisers said its national coalition remained ready to mobilise if Mr Trump sought to undermine the results. More local events were expected in Arizona and Pennsylvania.

Some unrest has been organised through social media platforms, putting a spotlight on companies such as Facebook despite their pledges to crack down on violence-inciting content.

Calls for pro-Trump protesters to attend a Detroit vote counting station late on Tuesday were made via a 79,000-strong private Facebook group called Stand Up Michigan to Unlock Michigan and a related page.

Facebook said it took down the group and page “based on the potential risk for offline harm” – but only after the event had taken place and the call to action was reported by NBC News.

One Facebook group called “Stop the Steal” had built up hundreds of thousands of members by Thursday afternoon, with some users calling for civil war and rioting. Others urged people to “get our guns” and take to the streets over baseless claims of voter fraud allegedly committed by Democrats.

The group was later culled by Facebook, which said the action was “in line with the exceptional measures that we are taking during this period of heightened tension”. The move marked the first known use of these measures during the 2020 election.

“The group was organised around the delegitimisation of the election process, and we saw worrying calls for violence from some members of the group,” a Facebook spokesperson said.

Unlike the so-called Brooks Brothers riots that sought to shut down a recount in Florida during the 2000 election crisis, there is no co-ordination between pro-Trump protesters and the Republican National Committee, said Joe Lowndes, a University of Oregon professor who studies far-right violence.

Without the RNC’s direction “you don’t have critical mass” at protests, but he warned there could be “more craziness” in coming days. – Copyright The Financial Times Limited 2020