US Democrats are targeted by pipe bombs

Potential explosive devices targeting Hillary Clinton and Barack Obama were intercepted by the US secret service during routine mail screenings. Hillary Clinton was campaigning for Democrats in Florida at the time. Video: Reuters 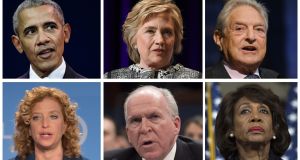 Senior figures in the Democratic party, including former US president Barack Obama and Hillary Clinton, have been sent potentially explosive devices by mail, causing deep unease across America less than two weeks before the mid-term elections.

Officials confirmed that pipe bombs had been intercepted before reaching their homes, while CNN’s headquarters in New York was evacuated after a suspicious device was recovered. The spate of threats came a day after billionaire George Soros, a Holocaust survivor who has been the target of far-right ire over his support for liberal causes, was sent a similar device.

There were reports that suspicious packages were also sent to the offices of other senior Democrats, including New York governor Andrew Cuomo and Florida congresswoman Debbie Wasserman Schultz, the former chair of the Democratic National Committee (DNC).

The attempted attacks were condemned across the political divide, but they raised questions about the rhetoric and invective being employed in the mid-term election campaign, including by US president Donald Trump, who has lashed out at Democrats and “liberals” in election rallies in recent weeks.

Speaking at an event in the White House, Donald Trump vowed to bring those responsible to justice, as he said that “the full weight of our government” would be deployed to investigate.

“The safety of the American people is my highest and absolute priority,” he said.

In a rare call for unity from a president who campaigned on a platform of deep political partisanship, Mr Trump said: “In these times, we have to unify. We have to come together.”

Speaking at an event in Florida, Hillary Clinton said she was fine, and thanked the Secret Service for intercepting the device “long before it made its way to our home”.

But the former secretary of statesaid that it was a “troubling time” for America.

“It’s a time of deep divisions, and we have to do everything we can to bring our country together.”

Following the evacuation of the CNN office, which caused widespread disruption in Manhattan, New York mayor Bill de Blasio described the incident as “an act of terror”.

“This is a very painful time in our nation. And it’s a time when people are feeling a lot of hatred in the air. Incidents like this exacerbate that pain and exacerbate that fear.”