Trump criticised after he praises politician for assaulting reporter 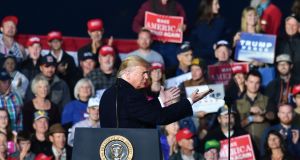 US president Donald Trump addresses supporters at a rally in Missoula, Montana, on Thursday, where he praised a politician for attacking a reporter. Photograph: Nicholas Kamm/AFP/Getty Images

The office of the British prime minister has indirectly criticised Donald Trump after he praised a Republican congressman for attacking a Guardian reporter, saying any violence or intimidation against journalists was “completely unacceptable”.

The response came after the US president used a rally to draw cheers from the crowd by hailing Greg Gianforte, a Congress member for Montana, for having assaulted Ben Jacobs, the Guardian’s political correspondent, in May last year.

Asked about Mr Trump’s comments, Theresa May’s spokeswoman said: “He obviously made comments at a political rally, and those are for him. But more generally we would always say that any violence or intimidation against a journalist is completely unacceptable.”

While oblique, the criticism is relatively strong by the standards of Downing Street, which generally tries to play down condemnation of Mr Trump’s often erratic behaviour, mindful of wider UK-US ties as well as the president’s promises about a post-Brexit trade deal.

Addressing a crowd of about 8,000 supporters on Thursday night, Mr Trump said someone who performed a body-slam is “my guy”. He said: “Greg is smart. And by the way, never wrestle him. You understand. Never.”

While Mr Trump has previously incited crowds to jeer at the media, and has described the press as the “enemy” of the US people, it was the first time he had openly and directly praised a violent act against a journalist on American soil.

The comments came as the White House remains under intense pressure over Mr Trump’s refusal to condemn Saudi Arabia despite growing evidence that its leadership ordered the decapitation and dismemberment of the journalist and Saudi critic Jamal Khashoggi.

Mr Gianforte’s attack on Jacobs came during a special congressional election in Montana when the candidate responded to a question about Republican healthcare plans by slamming Jacobs to the floor, breaking his glasses, while shouting: “Get the hell out of here.”– Guardian