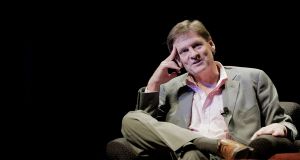 Michael Lewis: “There shouldn’t be 35 or 40 per cent of the public that still has a kind thought for Donald Trump.” Photograph: TJ Kirkpatrick/Getty Images

In January 2017, Joe Hezir, the mild-mannered chief financial officer of the US Department of Energy was working quietly in his office in Washington DC. As the days passed, he expected a call from the Trump administration asking him to stay on in his job. Though an Obama-era appointee, the personnel of one administration typically stay on to help the incoming team, often for more than a year.

But “the call never came”, writes Michael Lewis in his new book, The Fifth Risk. “No one even let him know his services were no longer required. Not knowing what else to do, but without anyone to replace him, the [chief financial officer] of a $30 billion operation just [upped] and left.”

The departure of US officials like Hezir, and the utter chaos that accompanied the ascent of Donald Trump to the presidency of the United States within the federal government, is the subject of Michael Lewis’s new book.

The US government is partly a portfolio of risks that are constantly being managed, like pandemics or natural disasters. Trump has amplified all these risks

The best-selling author shot to fame with books such as The Big Short and Flashboys, which revealed the inner workings of the financial system. They were based on his own stint on Wall Street as a highly-paid investment banker, before he abandoned his career and followed his dream of writing full-time.

As a writer with a knack for tackling arcane and often complex subjects and making them presentable for a general audience, Lewis’s latest book focuses on federal agencies – the sprawling civil service that underpins the working of the US government.

As he explains in a phone interview from his home in Berkeley, California, the genesis of the book was two-fold.

“A couple of things happened at the end of 2016. I had just finished The Undoing Project, my book on Nobel prize-winner Daniel Kahneman and Amos Tversky, who studied people and risk, so I was thinking about the concept of how people misjudge risk in systemic ways.”

“Then Trump is elected, and I saw how he approached running the government. The United States government is – among other things – a portfolio of risks that are constantly being managed, most of the them are remote, catastrophic risks like pandemics or natural disasters.

“And I realised, Trump has amplified all these risks, and the American people are not paying much attention. They’re talking about Trump but they’re not talking about the effect of Trump on the things he is supposed to be running.”

Lewis packed his bags and headed to Washington in a quest to get under the bonnet of the grand machinery of the US government.

His journey led him into the dusty corridors and rooms of government departments, to off-the-record meetings with government employees who were scared to go public with their concerns, and conversations with senior figures in Trump’s orbit before he fell out with them, such as former New Jersey governor Chris Christie and Breitbart founder Steve Bannon.

The result is a remarkable insight into the world’s most important government system as it grapples with one of the most inexperienced presidents in US history.

It opens with a portrait of the transition period – the two-month period between the 2016 November election and Trump’s inauguration in January – when the incoming president is required by law to set up a transition team. Christie, who was appointed by Trump to manage the transition period before being fired over differences with Trump’s son-in-law Jared Kushner, is trying to battle Trump, who is raging against the need to employ resources to prepare for presidency.

The reason? He never expected to win. “Why study for a test you’ll never need to take?” writes Lewis.

After Trump fires Christie and takes over the transition himself, the Trump team moves to Washington. But as the vast machinery of the federal government awaits instructions, none arrive. Not only does the incoming team fail to show up to scheduled meetings, the Trump administration also pushes through its own political appointees, many with little experience.

Barry Myers, the chief executive of AccuWeather – a commercial weather forecaster – is nominated by Trump to lead the National Oceanic and Atmospheric Administration, a government agency that includes the National Weather Service – despite the fact that his company had been trying to curb the authority of the national weather agency for decades.

One official in the Department of Energy describes receiving a call informing her that her office was now being occupied by Eric Trump’s brother-in-law. “Why? No one knew,” writes Lewis.

But while much of the book’s strength is the insight it gives to the inner workings of the Trump administration, The Fifth Risk is also a serious exploration of the work done by government agencies – a radical proposition in a country that often views the administrative state with suspicion, particularly in Republican politics.

Trump is a catastrophe of a human being. I cannot think of a single human virtue he possesses. The costs are going to be paid for generations

Lewis focuses in particular on three Government departments – Departments of Energy, Agriculture and Commerce – whose headquarters are located in the grand austere buildings that line the streets of Washington, just blocks from the White House.

The heroes in Lewis’s book are not the well-known names of the Trump administration but ordinary, hard-working career civil servants who have chosen to work for the US government for relatively low pay.

The book is peopled with characters such as Kevin Concannon, the son of Irish emigrants who grew up in a working-class family of seven in Portland, Maine. He ran the government department responsible for the school lunch programme, which distributed food to families in need across the country. His call to public service was spurred in part by a visit by two social workers to his family who suggested new medication for his brother, who had schizophrenia, an early lesson in how the federal government could help those in need.

As for Lewis’s views on Trump two years after his election, Lewis is unequivocal. “It’s just a catastrophe. He is a catastrophe of a human being. I cannot think of a single human virtue he possesses. He has, as a rule, taken the United States government, which is dealing with long-term problems, and has shifted everybody’s focus to the next few hours. It’s going to take people a while to realise how bad this is. The costs are going to be paid for generations.”

Lewis is equally despondent when it comes to his views on the mid-term elections, now just a few weeks away.

“I had no idea how disturbed my country was, and it remains disturbed. Even if the Democrats eke out victories in the House and the Senate, we should not be anywhere near this place. There shouldn’t be 35 or 40 per cent of the public that still has a kind thought for Donald Trump. He should be totally isolated at this point. He’s not. He can still get the crowds.”

“People still trust the dollar, trust the US treasury. I wonder how long it is going to be until he manages to undermine that.”

As we talk, it is clear that Lewis is back in familiar territory: the world of financial markets that first propelled his literary successes.

Ten years after the collapse of Lehman Brothers, I ask him if he feels that the lessons of the crash have been learned.

“The banking system is better regulated, much better capitalised, so the likelihood of bank runs as being the source of the next financial crisis has decreased a lot.” The dangers of another financial crash lie in the political realm, he believes. For example, if the US government were to make a provocative move on China, that could severely disrupt the financial world.

Ultimately, however, he believes that the real impact of the financial crisis was political.

“The response to the financial crisis showed everybody in America that the system was rigged in favour of the elites. Everybody else has to live by the harsh rules of capitalism. This spawned those angry movements on the right and the left. They spawned the Tea Party, which is some of the core of the Trump support, and it spawned the Bernie Sanders campaign. The two have a lot in common.

“I think in the United States the drama of the financial crisis changed the politics of the country, for the worse, and made Trump possible.”

Michael Lewis will be in Dublin on November 8th for a public interview. The Fifth Risk is published by Allen Lane, €25