US Democratic race: How do the Iowa caucuses work? 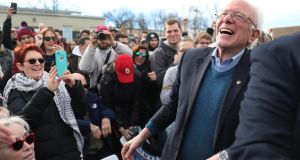 On Monday, Iowa Democrats will cast their vote for the party’s presidential nominee – the first contest in the 2020 primary season.

Iowa’s pole position on the calendar has traditionally given the midwestern state of 3m people an outsized hand in picking the party’s nominee. Here is a breakdown of how the state’s caucuses work and what to expect.

What will happen on Monday?

Unlike the majority of US voters who cast secret ballots in state primaries, Iowa residents vote in caucuses – or small local gatherings in which they publicly declare their support for a particular candidate.

The caucuses take place in close to 1,700 locations across the state, ranging from school gymnasiums to people’s homes. They will also happen at 96 so-called “satellite locations” in other parts of the country, so that registered Iowa voters who temporarily live outside the state can participate – the first time that the party has allowed this.

Based on the results, candidates will be allotted a certain number of delegates, beginning their race to secure the most delegates possible in primaries and caucuses across the country. The candidate who secures the most delegates at the end of the 2020 primary calendar wins the nomination.

How do the caucuses work?

When voters arrive at their caucus precinct, they will pick a first-choice candidate, and huddle with the candidate’s other supporters. They will also write their chosen candidate’s name on a piece of paper – the first time the caucuses will also keep a paper record.

In order to receive delegates, candidates must pass a 15 per cent viability threshold in the first round of voting. If their candidate does not surpass that threshold, participants have the choice to pick a different candidate in the second round of voting or have their vote discounted.

The second round of voting will determine how many delegates a candidate gets in Iowa. More than 11,000 delegates are chosen on caucus night, a number that will be whittled down to 41 delegates – the individuals who actually travel to the Democratic national convention, which will be held in Milwaukee in July.

Voting begins at 7pm local time on Monday and is expected to be over in under an hour at most locations.

How will the winner be decided?

This year, the Iowa Democratic party will announce winners in both the first and second rounds of voting, as opposed to just the second.

This change in rules came in response to criticism of the 2016 caucus when supporters of Bernie Sanders argued that the results did not capture the large number of voters who selected their candidate as first choice.

Should a candidate prevail in the first round of caucusing but not in the second, he or she will enjoy mostly a symbolic victory, as only the second vote determines the number of delegates. Nonetheless, it opens the possibility that more than one candidate could claim victory in Iowa and share the momentum heading into New Hampshire, the next state to hold a primary contest.

Already, some of the candidates are reported to be trying to take advantage of Iowa’s multi-round voting system.

US news outlets have reported that Joe Biden’s campaign has been in contact with the campaigns of candidates attracting less support in polls, such as those of Andrew Yang and Tom Steyer, in an effort to encourage their supporters to back Biden if their candidate fails to make the second round. (There is no evidence that any of the campaigns have accepted these advances.)

Do the results in Iowa matter?

The state’s 41 allocated delegates represent just 1 per cent of the national total. Meanwhile, only a minority of Iowans participate in the caucuses, which are open only to registered Democrats. Only 171,000 people took part in the 2016 caucuses, roughly 16 per cent of the eligible voting population.

Still, the contest is often viewed as a pivotal, make-or-break moment by many campaigns, lending momentum to the winners and hurting presumptive frontrunners who do not perform as well as expected. In modern US history, no Democratic candidate who has won both Iowa and New Hampshire has failed to win the party’s nomination. In 2008, Barack Obama’s upset win in the state ushered in a series of victories in contests across the country, while Sanders’ close second behind Hillary Clinton foreshadowed a longer and more competitive primary than anticipated.

This year’s contest could throw up a surprise. As the blog FiveThirtyEight notes, in the past 40 years, there have never been four leading candidates – Biden, Sanders, Elizabeth Warren and Pete Buttigieg – all polling within 10 percentage points of each other just days before the caucus. This is another reason why this race is one to watch. – Copyright The Financial Times Limited 2020