UK can ‘rediscover the power of independent thought and action’, prime minister says 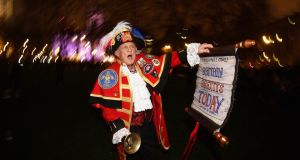 Pro-Brexit supporters celebrate outside the Houses of Parliament in London on Friday. Photograph: Neil Hall/EPA

Boris Johnson has described Britain’s exit from the European Union after 47 years as the start of a new era of co-operation between a more confident Britain and its European neighbours. Britain ceased to be an EU member state at 11pm on Friday night, although it will continue to follow EU rules and enjoy most of the benefits of membership until the end of 2020.

“If we can get this right I believe that with every month that goes by we will grow in confidence not just at home but abroad. And in our diplomacy, in our fight against climate change, in our campaigns for human rights or female education or free trade we will rediscover muscles that we have not used for decades, the power of independent thought and action,” he said.

“Not because we want to detract from anything done by our EU friends – of course not. We want this to be the beginning of a new era of friendly co-operation between the EU and an energetic Britain. A Britain that is simultaneously a great European power and truly global in our range and ambitions.”

A light show projected a countdown clock on to the black brick facade of 10 Downing Street as Mr Johnson, his cabinet, government officials and prominent Vote Leave supporters drank English sparkling wine inside. A number of government buildings around Whitehall were illuminated and Nigel Farage’s Brexit Party held a rally in Parliament Square but there was no official public event to mark the moment of Britain’s exit from the EU.

In a speech on Monday, Mr Johnson will outline Britain’s objectives in the next phase of negotiations with the EU about a future relationship including a trade agreement. The European Commission will publish its proposals for the EU’s negotiating mandate in Brussels on Monday but formal talks will not begin until March.

Scotland’s first minister Nicola Sturgeon said that the sadness felt by Scots in leaving the EU was tinged with anger but she warned advocates of independence not to allow it to weaken their sense of purpose.

“We must not let the Tories turn a positive, persuasive and invigorating discussion about the best future for our country into an arid and bitter argument about process and procedure,” she said.

A YouGov poll this week showed a narrow majority of Scottish voters, 51 per cent to 49 per cent, in favour of independence for the first time since 2015. Boris Johnson has formally rejected a request from Ms Sturgeon to allow the Scottish Parliament to authorise a new, legally-binding independence referendum.

The SNP hopes that if it builds support for independence and wins next year’s Scottish Parliament elections, it can bring enough pressure to bear on Mr Johnson to agree to a fresh referendum.

“To achieve independence, a referendum, whenever it happens – whether it is this year as I want, or after the next Scottish election – must be legal and legitimate,” Ms Sturgeon said.