Patrick Freyne: Nigel Farage and a cabaret artiste help usher the UK into its new era

Singing patriotic songs and waving Union Jack flags, more than 5,000 pro-Brexit Briton's marked their departure from the EU on Parliament Square, London with fireworks and cheering in the heart of the capital. Video: Reuters 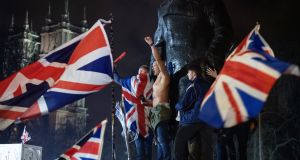 And so it is Britain’s life in the EU ends, not with a bang, but with a low-key variety show in front of a few thousand Brexit superfans. At about 9.15pm the big screen overlooking Parliament Square begins showing a Reeling-in-the-Years-style recap of European-British relations, beginning, improbably, with England winning the World Cup and featuring people to boo (Blair, the BBC) and people to cheer (Thatcher, Nigel Farage).

This is repeated twice, possibly because British people need never crack open a history book again – this is year zero. The newly redundant Brexit Party MEP and compere Richard Tice takes to the stage. “Hello Westminster! Hello Brexiteers! Are we going to have fun?”

“F***king right, man,” says the man standing on the small wall next to me (I’m standing on a sort of wall crammed with people).

Tice introduces three young women who, along with a live band, lead everyone in a mass karaoke version of Land of Hope and Glory. The lyrics appear on a big screen, but there’s a bit of a delay, possibly because that’s how electronics work in a Britain unshackled by eurocrats. The upshot is that several thousand people have to sort of agree on which wrong rhythm to follow. It’s like a metaphor for Brexit.

Tice introduces Brexit Party politician Ann Widdecombe, who he jokingly introduces as a former politician turned dancer, and she comes out to tell everyone that “tomorrow we will wake up in a free country with a glorious future”. Celebrity publican and Wetherspoons founder Tim Martin arrives to say relatively conciliatory things about the need to respect European citizens living in Britain. It turns out that two of the men sharing my wall have selfies of themselves with Tim Martin. They show them to each other. He’s popular, I guess, because he says things like: “Were they worried about signing a trade deal at the Boston Tea Party?”

Richard Tice introduces a cabaret artiste in a top hat called Dominic Frisby who proceeds to sing two songs. One features the line “Maybe Donald Trump is not all bad?”, while the second lists Remainer politicians, celebrities and institutions before a regular refrain of: “The British told them to f**k off.” For fear of breaking public decency laws, Frisby himself only says “fudge off”, but the crowd are not so restricted. “That should be the new national anthem,” says an emotional young man standing behind me.

Veteran Brexit campaigner and chairman of Labour Leave John Mills comes on stage. He speaks inaudibly into a microphone so people shout to have his microphone turned up. This is followed by everyone doing an out-of-sync karaoke version of Rule Britannia. “For f**k’s sake,” says the young man behind me. They have, at this point, 30 minutes left to blame Europe.

Radio host Julia Hartley-Brewer comes out to say that although people say they shouldn’t be triumphant they should totally be triumphant. She tells them they shouldn’t be ashamed of Brexit, which feels like she’s misreading the mood. TV presenter and Apprentice winner Michelle Dewberry tells the audience that whereas once there were Leavers and Remainers, now “we are all leavers”. Peter Bone says that “tonight we take our country back”. A man sings It’s Not Unusual. A woman sings We are the Champions. And, of course, they both sing The Final Countdown, a song by a Swedish band called Europe.

And then there’s Nigel Farage, looking like the man who ate the cat who got the cream as he walks the stage, counting the minutes toward “the single most important event in the modern history of our great nation”. He talks about what it took to get where they are. He lists off the European figures they never have to listen to again. He promises that while Britain will work with Europe, “we will not take orders”.

He shows everyone the new 50 pence coin, especially released to commemorate this day, and everyone cheers. “The war is over. We have won,” he says. The big screen then displays a countdown from 30, accompanied by what I assume is the recorded sound of Big Ben’s bongs. Everyone cheers and then everyone sings the national anthem and then everyone, or most everyone, walks out past the police cordons and into the reality of being a nation alone. “What now?” says the young man behind me. He’s probably just asking which pub his friends want to go to but I hear it a little more existentially. What now, indeed?