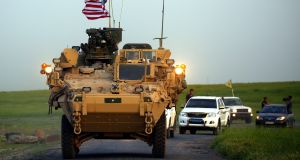 US forces, accompanied by Kurdish People’s Protection Units (YPG) fighters, drive their armoured vehicles near the northern Syrian village of Darbasiyah, on the border with Turkey, in April 2017. Photograph: Delil Souleiman/AFP/Getty Images

US president Donald Trump has claimed victory over the Islamic State terror group in Syria as the White House said it had begun to pull US troops out of the country.

The troop withdrawal hinted at disagreements between the White House and the Pentagon over Syria policy and was branded a “mistake” by one Republican senator.

“We have defeated ISIS in Syria, my only reason for being there during the Trump Presidency,” Mr Trump wrote on Twitter on Wednesday morning, using an alternative name for Islamic State.

Sarah Sanders, White House press secretary, said US troops had “started returning home” after defeating the “territorial caliphate” but that the US was “ready to re-engage at all levels to defend American interests whenever necessary”.

The Pentagon appeared to take a different stance, saying that “at this time, we continue to work by, with and through our partners in the region”.

When Patrick Shanahan, deputy defence secretary, was asked by reporters about withdrawing troops from Syria, he said: “I’m not going to make any comments.”

Foreign policy analysts described Mr Trump’s move as a stark departure from existing US policy on Syria that left future diplomatic involvement in the region in question.

Aaron David Miller, a director at the Woodrow Wilson Center, said: “It’s clear [Mr Trump] doesn’t understand the rationale, nor has he ever been comfortable, with this deployment, and I think if there’s any silver lining here at all it’s the surfacing of the reality that we don’t have a coherent, cohesive policy towards Syria.”

We have defeated ISIS in Syria, my only reason for being there during the Trump Presidency.

Mr Trump’s declaration came shortly after media reports that his administration was considering a plan to withdraw its troops from the Syria, which has been mired in a civil war since 2011 and was a breeding ground for Islamic State.

The US president previously said in April that he planned to withdraw the estimated 2,000 American troops from the country “soon”. But he was apparently persuaded not to pull them out, and in September John Bolton, his national security adviser, said US forces would remain in the country as long as Iranian forces operated there.

US officials have also expressed concern in recent weeks about Islamic State’s ability to regain strength if left unchecked.

James Jeffrey, the US’s top diplomat on Syria, said last month that Washington was “concerned about Isis as an insurgent force, as a terrorist force”.

“That’s why we say that US troops will stay on in Syria until the enduring defeat of Isis,” he said. “We’re not there yet.”

Nicholas Burns, a former US under-secretary of state, said the US troop presence gave the US diplomatic leverage that would be crucial to rebuilding Syria. “If, in fact, the Syrian civil war is going to wind down in 2019, there is going to be a major diplomatic negotiation to put Syria back together,” he said.

“The US should want to assemble a diplomatic alliance that includes the US, the European allies, the Sunni Arab states and Turkey if possible to balance the weight of Russia, Iran and the Syrian government in the high stakes diplomacy ahead.”

Lindsey Graham, a Republican senator from South Carolina, said the withdrawal of troops was a “mistake” that would leave Kurdish militias – the US’s main local ally in the fight against Islamic State – vulnerable.

“An American withdrawal will put the Kurds and all those who came to America’s aid in destroying Isis at tremendous risk,” said Mr Graham. “It will make it more difficult to recruit future partners willing to confront radical Islam. It will also be seen by Iran and other bad actors as a sign of American weakness in the efforts to contain Iranian expansion.”

Recep Tayyip Erdogan, Turkey’s president, warned last week that his military was preparing an offensive against the Kurdish forces that dominate the US-backed Syrian Democratic Forces in north-eastern Syria.

Ankara considers the Kurdish militants as terrorists and an extension of the Kurdistan Workers’ party, which has been fighting a three-decade insurgency against Turkey, and has long complained of the US’s support for the SDF.

A spokesperson for Kurdish militants said they were not aware of a US decision to withdraw.

Islamic State militants have been driven out of almost all the swaths of territory they controlled after launching a devastating insurgency across Iraq and Syria in 2014. The Syrian Democratic Forces, the US’s main local ally in the battle against the terror group, claimed last week to have captured Hajin, a town in north-eastern Syria that was the militants last urban stronghold in the country.

But US and SDF officials say the extremists have returned to insurgent roots and are still capable of mounting deadly attacks.– Copyright The Financial Times Limited 2018