Yemeni ceasefire ‘seems to be working’ after early violations 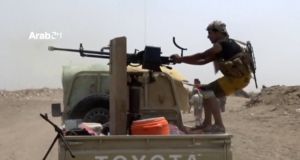 Shots are fired from a vehicle during heavy fighting between the Yemeni government and Houthis in Hodeidah, Yemen. Image: Arab 24/via Reuters

Yemen’s Red Sea Hodeidah port and neighbouring city were quiet on Tuesday, although a ceasefire that came into effect at midnight was violated for several hours by Saudi bombing and clashes between government forces and Houthi rebels.

UN envoy Martin Griffiths stated: “I’m remarkably familiar with ceasefires that don’t work, and this one does seem to be working so far. It is the first time the skies have been quiet over Hodeidah for many, many months. So far, so good. Fingers crossed.”

Earlier truces in Yemen’s near four-year-old civil war have not held. This time Yemeni warring parties have committed to a ceasefire and confidence-building measures reached during talks in Sweden last week. If the ceasefire holds, peace negotiations could begin at the end of January.

UN monitors are due to deploy this week. The Houthis are to withdraw from the port within 14 days and from the city within 21 days, while government forces are to redeploy from the port’s approaches, city suburbs and the main highway from Hodeidah to Sana’a, the Houthi-held capital.

The port is to be controlled by “local forces” under UN supervision, and port revenues are to be transferred to the Central Bank in Sana’a to pay Houthi area civil servants who have not received salaries for two years.

The sides agreed to release 15,000 prisoners in the coming months and to reach accords on the Sana’a airport and the Houthi siege of the city of Taiz, held by pro-government forces.

The overall deal appears to have the support of outside powers involved in the war. Saudi Arabia and the Emirates intervened in March 2015 after the Houthis occupied a wide swathe of territory and drove the government into exile in Riyadh.

External intervention transformed a civil conflict into a regional war with the US, UK and France backing the Saudi-sponsored government and Iran, to a limited extent, supporting the Houthis.

During an interview on Monday with CNN, Griffiths argued that the ceasefire was driven by humanitarian necessity, as the destruction or disruption of Hodeidah port could precipitate a catastrophe. The port handles 80 per cent of Yemen’s imports and 70 per cent of humanitarian aid for 75 per cent of the 28 million Yemenis who are food insecure; 14 million are on the brink of starvation and 85,000 children have died due to hunger and disease.

The death toll from warfare stands at 60,000, with the majority of civilian fatalities caused by indiscriminate Saudi bombing.

European support for the Saudi-led campaign has flagged as the plight of Yemeni civilians has worsened. Although the Trump administration remains determined to provide the Saudi-Emirati coalition with arms and logistical support, the US air force halted in-flight fuelling for Saudi warplanes.

Senate Democrats and Republicans issued a resolution calling for withdrawal of US military personnel involved in the campaign, a halt to US arms deliveries and an end to the war.

The international community began to focus on the Yemen war after the October 2nd murder in the Saudi consulate in Istanbul of Saudi dissident Jamal Khashoggi, a US resident and Washington Post columnist.

As evidence has increasingly implicated Saudi crown prince Mohammed bin Salman, the US Senate – following a briefing by the CIA – accused him of ordering Khashoggi’s death. President Donald Trump dismissed the claim and vowed to veto measures Congress could adopt after Democrats become the majority party in the House of Representatives in January.

After being appointed Saudi defence minister, Bin Salman (33) launched the Yemen campaign in the expectation of an easy and early victory. Instead he has executed a brutal war of attrition and now faces global censure.