EU to maintain support for Border peace initiatives after Brexit

The European Union set out short-term measures on Wednesday (December 19th) to limit disruption to air traffic, financial services and trade if Britain left the bloc without a deal next March. Video: EBS 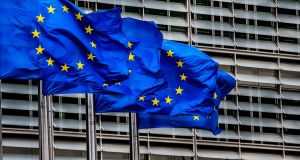 The EU has stepped up its planning for a no-deal Brexit scenario, with the European Commission on Wednesday publishing a schedule for temporary emergency legislation to manage and soften the break with the UK.

Among the commitments is a reaffirmation by the commission to continued funding of the EU Peace programme in the Northern border counties until at least 2020.

Peace is an EU-funded cross-Border co-operation programme created to support peace and reconciliation and to promote economic and social progress in the North and the Border region of the Republic. The commission has already put forward proposals for the budget period after 2020 to continue and strengthen the programme.

The 14 measures pubished on Wednesday, in areas including citizens’ rights, air landing rights and safety, and the free movement of animals, will be taken unilaterally by the EU on condition that the UK reciprocates fully. And they will apply for a limited period only – of up to nine months or a year – from the day Britain leaves the EU on March 29th. They cover only a small fraction of the areas likely to be affected by British withdrawal.

Because of time constraints the commission will immediately begin the process of putting legislation through both the European Council and Parliament.

The commission communication does not deal with provisions on the North-South frictionless Border in the event of a no-deal scenario. EU officials, in commmon with Irish and British diplomats, refused again on Wednesday to answer detailed questions on that political hot potato, beyond expressing their determination that no border infrastructure will be built and reminding the UK of its commitment to the Belfast Agreement.

“We have been specifically instructed not to answer that question,” one senior Irish civil servant told The Irish Times recently.

British sources insist privately that it is not their intention to build border checks in the event of a no-deal. But they say, echoing the private views of senior EU officials, that they expect the Irish will be required by their EU partners to check goods on the Border as they enter the EU.

The communication makes clear that member states are under an obligation to implement the EU’s customs code in dealings with “third parties”.

Crucially the British are understood to believe that sanitary and phytosanitary (SPS) controls to protect humans, animals and plants from diseases, pests and contaminants. and food checks will not have to be conducted on the Irish Border as the whole of Ireland is regarded as one SPS region. Such controls already happen at Holyhead and Stranraer, and will, they say, be expanded.

Freight in transit will continue to be covered by the Transit Convention to which the UK remains a member. It will allow monitoring and barcoding on ferries and should allow lorries travelling on the landbridge between Ireland and continental Europe to proceed sealed through the UK and onwards without undergoing customs checks.

How passage through Dover, likely to be extremely congested by goods requiring full customs clearance, will be arranged for Irish goods remains unclear. The transit arrangements would also have little effect on requirements for border controls in the North.

Among the measures being proposed by the commission are restricted rights for flights from UK-based airlines to land in EU airports if the flights are going to or from the UK. But this will not include landing rights for UK airlines travelling from third countries such as the US or Israel. UK-based airlines will be able to fly passengers to Paris or Rome direct but not stop in Paris to pick up passengers.

The commission encourages member states to secure the continuing residency rights of UK citizens living in the rest of the EU post-Brexit, if this is reciprocated. On Wednesday the UK set out a similar package for EU citizens living in the UK. “As regards social security co-ordination, the Commission considers it necessary that member states take all possible steps to ensure legal certainty and to protect the rights acquired by EU27 citizens and UK nationals who exercised their right to free movement before March 30th, 2019,” the commission states.

The commission will secure some measures of financial market continuity, specifically the central clearing of derivatives contracts for a year. There are risks to financial stability in a no-deal scenario, deriving from a disorderly close-out of positions of EU clearing members in the UK central counterparties, the commission says.

The commission will propose measures ensuring continued recognition of air safety certificates for a limited period of time, and at airports ensure that passengers and their cabin baggage flying from the UK and transiting via EU27 airports continue to be exempted from a second security screening.

It will extend by a year the right of road hauliers to bring goods into the EU.

“However, even if the UK is listed, strict health-related import conditions applied to third countries will be required and these imports will have to undergo sanitary and phytosanitary controls by member states authorities at border inspection posts.”

There are also measures on climate emissions allowances and personal data sharing.