British Labour leader Jeremy Corbyn has been accused of calling UK prime minister Theresa May a "stupid woman" during a feisty exchange in the House of Commons. Video: Parliament TV 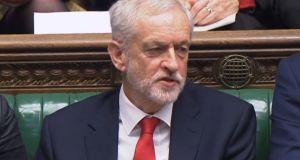 British Labour leader Jeremy Corbyn has been urged to “apologise or clarify” what he was saying when he appeared to mouth “stupid woman” after British prime minister Theresa May had spoken during Prime Minister’s Questions in Westminster.

Video shows the opposition leader saying the words under his breath after Mrs May likened Labour’s attempt to table a no confidence motion in her to a pantomime.

But a spokesman for Mr Corbyn denied he had said “stupid woman”, instead insisting he had mouthed “stupid people”, referring generally to MPs.

Conservative Party chairman Brandon Lewis said on Twitter: “Will jeremycorbyn apologise or clarify exactly what he was saying? Looks shocking on the film, unacceptable in any environment.”

The health secretary Matt Hancock wrote on Twitter: “The mask slips. Jeremy Corbyn’s abuse of the Prime Minister shows what a reactionary misogynist he is”. He added: “Unreal how Corbyn supporters are actually *defending* him calling the PM a ‘stupid woman’. Sickening. This misogyny now runs deep in Corbyn’s Labour — and runs right to the top.”

Labour MP Stella Creasy, who has talked publicly about misogynist abuse she has faced on social media, wrote on Twitter: “This is not ok. PMQs is a hotbed of emotions but I hope that Jeremy will accept this kind of behaviour isn’t his normal good nature or what we expect of progressive men #21stcenturycalling”.

Tory former minister Sir Patrick McLoughlin used a point of order during PMQs to accuse Mr Corbyn of having “muttered” that Theresa May was a “stupid woman”. Cries of “shame” and “disgraceful” were heard from the Conservative benches at this point. Sir Patrick added: “Would it not be appropriate for him to come back into this chamber and apologise?”

SNP MP Stewart McDonald tweeted: “If Corbyn did say the PM was a ‘stupid woman’ then yes, its a disgrace and he should apologise. Am I to believe that the hoards of male Tory MPs — some the most obnoxious people I’ve ever come across — feigning outrage are being sincere? No.”