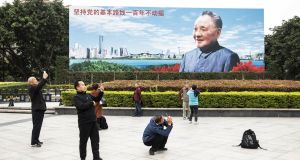 A billboard features an image of China’s late former leader Deng Xiaoping in Shenzhen at the weekend. The Chinese government will continue a multi-year effort against pollution, poverty and financial sector risks, while underlining commitment to the multilateral global trading system, President Xi Jinping said at a Beijing ceremony celebrating 40 years of reform and opening up. Photograph: Qilai Shen/Bloomberg

A major exhibition at Beijing’s National Museum, which celebrates 40 years of reform and opening up, credits late Chinese leader Deng Xiaoping with getting change under way – but the real star of the show is President Xi Jinping.

A diverse range of displays in The Great Revolution exhibition shows the first Chinese share certificate from 1984, the first patent issued a year later, as well as ration coupons from the 1960s, robot legs for amputees, a model of China’s domestic airliner C-919, and the high-speed train – one of the great technological achievements of the last decade.

The scale of the exhibition, covering China’s political, economic, cultural and military life in the past four decades, makes it feel like a rallying call as China tries to maintain a stable economy during an increasingly tense trade war with the US.

Security at the museum is tight. Crowds of People’s Liberation Army personnel are visiting the show, while People’s Armed Police units march up and down outside. The vast exhibition space is packed with cadres, police officers and work units from government offices.

There are exhibits marking landmark events. Ireland’s Peter Sutherland is depicted in negotiations with officials about China joining the World Trade Organisation, which it eventually did in 2001.

China was effectively closed to the outside world during the period of ideological chaos known as the Cultural Revolution (1966-1976). After the death of Chairman Mao in 1976, the economy was in disarray. New leader Deng Xiaoping introduced various market economy reforms and opened the country up to foreign investment in December 1978, and since then the economy has been transformed into the world’s second largest.

Deng also put in place a political system where power was shared at the higher echelons, and introduced term limits to make sure a dangerous cult of personality did not emerge again.

Xi has abolished term limits, however, and this exhibition shows how he has very much placed himself at the core of the party. The president’s philosophy, the “Xi Jinping Thought on Socialism with Chinese Characteristics for a New Era”, has been enshrined in the constitution.

Under Xi, the Communist Party has a more prominent role in public life

Deng’s face is one of the first things you see when you pass through the vast central area, lined with giant screens, and enter the exhibition proper. There are sections dealing with presidents Jiang Zemin and Hu Jintao, but the lion’s share of the political section of the exhibition is devoted to Xi.

Under Xi, the Communist Party has a more prominent role in public life. Private companies such as the carmaker Geely, and Alibaba, whose billionaire founder Jack Ma was recently outed as a Communist Party member, have high profiles at the show – but it is state-owned enterprises and products that really stand out.

Reform of the military has seen cutbacks in personnel to about 2 million troops, but also brought massive investment in technology. In the military section you are confronted by images of the country’s two aircraft carriers, spearheading an exhibit of homegrown rockets, tanks and other military vehicles. Here Xi sports his camouflaged uniform in his role as head of China’s military.

One of Xi’s main policies has been a crackdown on corruption, and there is a room dedicated to the success of the campaign, decorated with a large, glowing hammer-and-sickle emblem.

Since the party’s disciplinary arm, the Central Commission for Discipline Inspection, started its investigations in 2012, more than 1.5 million corrupt officials have been punished.

Among the items on display here is a letter of self-criticism by Lu Wei, the former internet chief who once visited Facebook’s US headquarters and hung out with Mark Zuckerberg before he fell victim to the anti-graft campaign.

“I have made serious and unforgivable mistakes, politically, economically, at work and in life, and abandoned the principle and the bottom line as a member of the Communist Party,” he writes.

Lu mentions bringing shame on his family, and refers to charges against him that he exchanged favours and influence for sex.

“We argued a lot about my lifestyle. She has given up on me. She once told me angrily that ‘I cannot manage you, but the Communist Party will regulate you sooner or later.’”