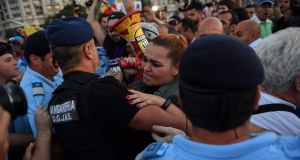 The leader of Romania’s ruling party has threatened to launch impeachment proceedings against the country’s president, Klaus Iohannis, after he condemned the government’s latest bid to soften anti-corruption legislation.

During a special session of parliament and with extraordinary speed, the governing Social Democrats (PSD) and their allies passed a Bill on Wednesday to partially decriminalise abuse of office – which PSD leader Liviu Dragnea was last month convicted of committing and sentenced to 3½ years in jail.

Critics say the reforms are aimed at getting Mr Dragnea off the hook, as part of a government drive to blunt anti-corruption efforts that has triggered Romania’s biggest street protests since its 1989 anti-communist revolution.

Mr Iohannis called events in parliament “simply revolting” and said it was “unacceptable how the PSD transformed parliamentary procedures” to pass the Bill with a minimum of debate in just three days, when such a process usually takes months.

“What has happened these days is dictatorship of the majority. It is deeply damaging to democracy,” he added.

“The changes that have been made are either useless or even toxic and damaging ... I am going to use all constitutional instruments to appeal to the constitutional court,” he added, making clear that he would not sign the Bill into law.

On Thursday, the secretary general of the Council of Europe urged the government to stop its criminal justice reforms until they had been assessed by the Venice Commission, an advisory panel of EU law experts.

“This reform risks contradicting Romania’s international obligations,” Thorbjorn Jagland said. “As a member state of our organisation, Romania is duty-bound to uphold the rule of law.”

Meanwhile Mr Dragnea – who leads the government from behind the scenes because a vote-rigging conviction bars him from public office – said the ruling coalition would decide on Monday whether to start impeachment proceedings against Mr Iohannis.

“He is not interested in the constitution or the law, he is interested in his own interest. He spoke of the dictatorship of the majority, but that is precisely the approach of a dictator, because it’s a majority [created] through elections.”

Mr Dragnea said he had discussed whether to seek the suspension of Mr Iohannis – by a parliamentary vote that is the first stage in the impeachment process - with Calin Tariceanu, head of the ALDE party that rules in alliance with the PSD.

“I told him that from my point of view the suspension of the president must be a serious option. Mr Tariceanu ... said we have to analyse and make a decision, yes or no,” Mr Dragnea said.

The PSD and ALDE accuse Mr Iohannis of defending a “parallel state” of prosecutors, opposition parties, media and civil society groups that supposedly wants to bring down the government.

The conspiracy theory – which sometimes features a role for liberal philanthropist George Soros – echoes those peddled by populist governments in Hungary and Poland, where the EU also has major concerns for the rule of law and democracy.

1 Martin ‘seriously concerned’ at Covid complacency amid pressure over church events
2 The far right rises: Its growth as a political force in Ireland
3 Golf group insist they adhered to public health guidelines during Tullamore trip
4 Life in Level 3: What will happen under new restrictions in Dublin?
5 Blanchardstown, Tallaght top table for highest Covid-19 rates
Real news has value SUBSCRIBE