Trump is reshaping US courts from the bottom up 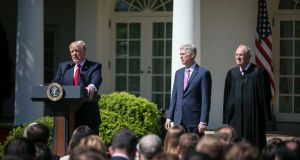 Anthony Kennedy’s retirement from the supreme court has given US president Donald Trump an opportunity to shift America’s highest court to the right. But the looming fight over Kennedy’s replacement is just one part of a broader struggle over the US judiciary that Republicans have so far been winning.

Less than two years into his presidency, Trump has already shaped the federal court system in ways that will long outlast his own time in office. He appointed his first supreme court justice, Neil Gorsuch, last year, and he has moved at a rapid pace to place young conservative judges in the lower courts, particularly the appeals courts that are the final word on most legal disputes.

WithKennedy’s departure and more than a dozen vacancies on appeals courts, Trump has the opportunity to embed conservatism in the judicial branch for decades as it grapples with key questions on abortion, civil rights and the gerrymandering of congressional districts.

“It will be a huge part of his legacy, if not his most long-lasting legacy,” said John Malcolm, a vice-president at the Heritage Foundation, a conservative think-tank, who helped shape Trump’s supreme court nominee list.

The supreme court’s recent decisions show just how high the stakes are. In the past two weeks, conservative justices have struck a blow against public sector unions, effectively raised the bar for antitrust action against big companies and upheld Trump’s ban on people from several Muslim-majority countries visiting the US. Progressives worry that a further shift to the right could endanger Roe vs Wade, the landmark 1973 decision that legalised abortion.

Republican control of the senate, which has to approve nominees to the federal courts, has been crucial to Trump’s judicial makeover. When he took office in 2017, there were openings for 88 district judges, 17 appeals court posts and – most importantly – the supreme court seat once occupied by the late Antonin Scalia.

The spaces were kept open by Mitch McConnell, the Republican senate majority leader, who had refused to allow former president Barack Obama to replace Scalia and turned the stream of lower court appointments into a trickle after the Democratic party lost control of the senate in 2015.

With Trump in the White House, McConnell lowered the bar for votes on supreme court nominees to a simple majority, allowing Gorsuch to be appointed over the objections of Democratic lawmakers. A similar decision by the Democrats in 2013 to lower the bar for appeals court nominees helped Trump clock up a record 12 appeals court appointments in his first year in office. Republicans have set the fast pace by largely ignoring the “blue slip” tradition of requiring approval for appeals court judges from senators in their state.

The appointments have included John Bush, opposed by Democrats who were outraged by his pseudonymous blog posts that criticised gay rights and compared abortion to slavery. Other nominees were less controversial, but all have been staunch conservatives favoured by the Federalist Society, an influential organisation of conservative and libertarian lawyers. The group’s executive vice-president, Leonard Leo, serves as Trump’s outside adviser on judicial nominees.

The appeals courts have 179 active judges across 13 circuits, serving for as long as they wish, and currently has 15 vacancies. Only a handful of cases progress to the supreme court, meaning that many areas of law are determined by the three-judge circuit court panels who review appeals from district courts.

So far, Trump has appointed 21 appeals court judges. Many have replaced conservatives rather than liberals, refreshing the bench rather than changing its composition. And the Republicans have yet to overturn a majority Democrat-appointed circuit. But if the Republicans hold on to the Senate for two more years, they may be able to create a majority of Republican appointees on the appeals courts, said Wheeler, and there is little the Democrats can do about it.

“Between the lack of a filibuster and the lack of a blue slip, at least for court of appeals, they really can’t slow things down too much,” he said.

The composition of the appeals courts has typically swung between a majority of Republican and Democratic appointees as the White House changed hands. Some circuits have long been conservative or liberal-dominated, such as the ninth circuit, which covers California. Republicans hope it can begin to be turned if they retain control of the White House and senate long enough.

The supreme court, however, since the 1970s has had an almost continuous conservative majority among its nine justices, who serve for life or until they choose to retire. Gorsuch (50) could be on the court for decades to come. The two oldest justices, Ruth Bader Ginsburg and Stephen Breyer, both liberals, are 85 and 79, respectively.

The desire to cement that right-wing majority has helped Trump keep traditional Republicans on side. During the 2016 presidential campaign, he garnered support by releasing a list of potential supreme court nominees with impeccable conservative credentials. With the selection of Gorsuch and his lower court appointments, Trump has delivered on that promise.

“He’s already laid the foundation for an incredible legacy on the courts,” said Carrie Severino, chief counsel at the Judicial Crisis Network, which is spending millions to support Trump’s supreme court nominee.

The degree to which Trump can build on that foundation depends on whether Republicans retain the senate in November and the White House in 2020. Before then,Trump will get to nominate Kennedy’s successor. On Wednesday, he said he would pick someone he hoped would serve for almost half a century. – Copyright The Financial Times Limited 2018