Some 270,000 Syrians who have fled fighting are stranded on border with Jordan 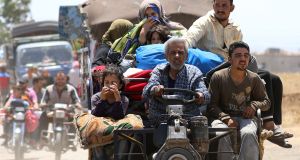 The Jordanian and Israeli armies are delivering food, tents and medical supplies to some of the 270,000 Syrians who have fled fighting between Syrian troops and insurgents in the southwest of the country.

Thousands are stranded on the Syrian-Jordanian border and are seeking refuge at camps for displaced people near the UN-monitored buffer zone along the Golan ceasefire line between Syria and Israel. Only wounded and ailing Syrians are allowed to cross into Jordan or the Israeli-occupied Golan.

Jordanian premier Omar Razzaz has called for the provision of humanitarian relief for refugees within Syria. Jordan has refused entry to the Syrians, citing both security and economic reasons.

Amman has expressed the fear that “terrorists” could be among refugees and says it cannot afford to host more Syrians than are already in the kingdom. Donors have failed to honour pledges to UN aid agencies.

Jordan hosts 1.3 million Syrians, of whom 660,00 are registered with the UN. In July 2014, Amman stemmed the flow of refugees, trapping up to 70,000 in a camp in no-man’s land where supplies are delivered by crane. Jordan urges those now seeking refuge to go home.

The Israeli army has delivered several tonnes of humanitarian aid to four refugee encampments in southwestern Syria. Defence minister Avigdor Liberman said Israel “was prepared to provide ... humanitarian assistance to civilians”, but added: “We will not accept any Syrian refugees [entering] our territory.”

In addition to delivering aid, Jordan has taken a proactive role in negotiations between the insurgent Southern Front and Russia. Jordanian foreign minister Ayman Safadi is due to hold talks today in Moscow with his Russian counterpart Sergei Lavrov.

A deal reached on Saturday between front and Russian officers collapsed when the front demanded Jordanian guarantees for the 800,000 Syrians living in Deraa province, which, until the Syrian army offensive began on June 19th, had been a “de-confliction” or truce zone.

In exchange for amnesty, fighters hand in heavy and medium weapons. Local men seek to remain on home turf rather than go to jihadi-held Idlib province in the northwest or Turkish-occupied territory in the north. So far there have been no transfers of fighters.

Syria’s strategy has divided the 54 Southern Front factions loosely grouped underthe Free Syrian Army umbrella, weakening the front and enabling Syrian troops to increase government control to from 40 to 60 per cent of Deraa province, cradle of the 2011 unrest that precipitated the war.

Saudi-backed opposition chief Nasr al-Hariri castigated the US for refusing to intervene on behalf of the front and accused Washington of making a “malicious deal” by abandoning armed groups formerly backed by the US.

Damascus has vowed to regain all Syrian territory. Once the capital’s suburbs and countryside were brought under government rule, insurgent-held territory in Deraa, Quneitra and Sweida provinces was expected to be next. The north, held by jihadi insurgents, Turkey, and US-supported Kurds is a far more difficult proposition.

Claiming neutrality in the struggle between Damascus and the Southern Front, Israel has reinforced troops and armour in the Golan. Israel’s military has said the Syrian army must be the sole force operating in the southwest and warned that involvement of Hizbullah and pro-Iranian militias allied to Damascus would not be tolerated.

Israel expects the 1974 Golan ceasefire agreement to be kept and the demilitarised zone to remain sacrosanct. Israel has, however, taken sides by staging missil attacks on alleged Iranian targets and arming and funding al-Qaeda’s Hay’at Tahrir al-Sham (once Jabhat al-Nusra) based in Quneitra.