Thai cave rescuers at ‘war with water and time’

Rescuers in Thailand are trying to find alternative ways to extract 12 boys and their football coach trapped inside a cave complex, as teams brace for heavy rain which could further delay the operation. Video: Ruamkatanyu Foundation 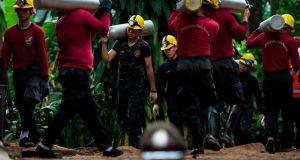 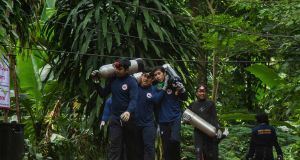 Thai rescue personnel carry oxygen cylinders back to their base camp at the entrance to the cave where members of a youth soccer team is currently trapped. Photograph: Lauren DeCicca/Getty Images 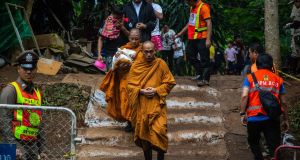 Monks lead out the family members of the boys from the cave site after a morning prayer on Saturday. Photograph: Lauren DeCicca/Getty Images 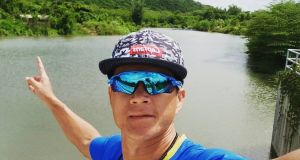 Former Thai Navy Seal Saman Gunan died during a rescue mission to free the trapped boys and coach for the cave in Thailand. Photograph: Reuters/Instagram/@smaankunan

A rescue mission for a young Thai soccer team and their coach trapped for two weeks in a flooded cave is at “war with water and time”, its leader said on Saturday, but was eyeing its best chance yet to free the group before expected heavy rains.

The message of hope came a day after the death of a Thai rescue diver, a grim turn in what began two weeks ago as a celebration of one of the boys’ birthdays at the Tham Luang cave complex in the northern province of Chiang Rai.

A team of Thai Navy Seals, soldiers, police and volunteers has been working frantically to drain the cave since the group was discovered on Monday.

They are now teaching the children, aged between 11 and 16 and not all of whom are strong swimmers, to attempt a treacherous dive through narrow, submerged tunnels.

“The next three to four days from now is the best and most ideal time for the rescue operation,” Narongsak Osottanakorn, the rescue mission chief and former provincial governor, told reporters.

“The current situation, with the air and water levels and the boys’ health, is the best yet,” he added.

“We’re still at war with water and time. The discovery...was just a small victory, but that doesn’t mean the war is over until we have won all three battles: discovery, rescue, and return home.”

In another development on Saturday, authorities confirmed the boys had communicated by letter with their relatives, many camped outside the cave’s entrance, for the first time since they were found.

An attempt to pass a phone to the boys earlier in the week failed.

In one letter, the boys list the foods they want to eat once safely home, such as fried chicken and “hot pan barbecue” and beg their teachers not to assign too much homework.

The coach, Ekapol Chanthawong, told parents in a separate letter that he would “take the very best care” of the boys and apologised for putting them through their ordeal.

Ivan Katadzic, a Danish diving instructor who has been ferrying oxygen tanks into the cave, said after a dive on Friday he was “double positive” about the mission because the water level had dropped considerably.

Mr Katadzic has not dived the final kilometre to where the boys are stranded on a muddy bank, the most dangerous part of the dive, during which rescuers have to hold their oxygen tanks in front of them to squeeze through submerged holes.

Alternative rescue plans include stocking the cave with supplies and an oxygen line to keep the boys alive for months until Thailand’s monsoon season ends, or drilling a shaft down from the forest above.

Narongsak said the drills would have to pierce 600 metres (1,970 feet) of fragile limestone rock to reach the boys and rescuers were discussing drilling angles.

Besides looking for possible holes from above, the team on the hill above is trying to block holes and divert streams that channel water into the cave before the weather turns.

“Everything is a race against time,” said Kamolchai Kotcha, an official of the forest park where the cave complex is located. His team would camp out on the hill to try and finish its work before the rain came, he said.

Growing international interest in the rescue has spurred help from countries such as Australia, Britain, China, Japan and the United States, among others.

On Saturday, Israel’s ambassador to Thailand visited the site. “I have been requested by the prime minister of Israel to come and see what kind of assistance the state of Israel can give its friend Thailand,” Meir Schlomo told reporters.

The president of soccer’s governing body, FIFA, has invited the boys to be his guests at the World Cup Final in Moscow on July 15th if they make it out in time.–Reuters