If EU gives UK delay until January 31st, pro-Remain parties will agree to an election 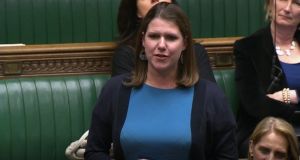 British prime minister Boris Johnson is on Monday set to oppose proposals from the opposition Liberal Democrats to call an early-December general election ahead of Brexit.

The prime minister is still awaiting a European Union decision on the duration of an extension. But he remains determined to press ahead with debate and a decision on his withdrawal agreement Bill – and hence ratification and Brexit – before going to the country on December 12th as the man who “got Brexit done”.

Tory party chairman James Cleverly denounced the “sequencing” of Lib Dem proposals in an interview on Sunday morning with Andrew Marr on the BBC.

He insisted the British government’s proposal allowed the UK “to leave with a deal and also gives the British people the election they need . . . Ours does both.”

Labour front bencher Dianne Abbott told Marr the party “needs to know what sort of extension the EU will give” before committing to the Liberal Democrats’ or the government’s motions on Monday – or to opposing both.

EU ambassadors are due to meet again on the issue in Brussels on Monday evening or Tuesday, having on Friday deferred their decision to await clarity from the Commons that an election would actually happen in the event an extension was granted to January 31st.

The UK will crash out of the EU without a deal on Friday if no extension is granted.

Should that clarity again not be forthcoming, with time running out, the ambassadors appear likely to grant that extension on condition the Commons by Thursday endorses a December election, sources in Brussels say.

“Labour will do anything in its power to stop a crash-out,” Ms Abbott said, insisting the party would carefully consider the Lib Dem proposal, but arguing that Mr Johnson should come before MPs on Monday to give a categorical assurance that he would not allow a no-deal departure during an election campaign while the Commons is adjourned.

Lib Dem leader Jo Swinson insisted on the programme that the party’s new proposals were designed precisely to prevent that possibility. Their plan, unveiled on Saturday with the support of Scottish nationalists, would allow Mr Johnson to secure a December poll with a simple majority of MPs.

Under a one-page Bill, the Fixed-Term Parliaments Act, which requires a two-thirds majority to call an election, would be amended to state that the next election would take place on December 9th, three days earlier than under Mr Johnson’s plans.

It states that the new election date would be cancelled should the EU fail to grant a three-month Brexit extension. The party is asking Mr Johnson to adopt the Bill and guide it through parliament between Tuesday and Thursday of this week, before dissolving parliament.

It believes the timing of its plan means the prime minister would not be able to bring back his Brexit deal to the Commons before the election campaign starts – which he is currently threatening to do.

Both Tory and Lib Dem proposals would require Labour support on Monday. But the Lib Dem initiative puts particular pressure on Johnson, who views achieving Brexit ahead of an election as a key platform for a successful campaign, to provide the reassurances Labour needs – as yet unclear – to rule out a no-deal departure during that campaign.

Tory Brexiteers are also fearful that amendment, or defeat, of the withdrawal agreement Bill, if it were returned to the Commons ahead of an election, could see Brexit itself put in jeopardy by an unpredictable election.

The ball, as the EU’s chief Brexit negotiator Michel Barnier would say, is in Mr Johnson’s court.