Trump vetoes resolution to pull US out of Yemen 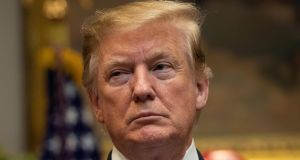 President Donald Trump has vetoed a resolution from Congress directing him to end US participation in the Saudi-led war in Yemen, the second such move of his presidency. Photograph: Nicholas Kamm/AFP/Getty Images

US president Donald Trump has vetoed a bipartisan resolution that would have forced an end to US military involvement in Saudi Arabia’s civil war in Yemen, rejecting an appeal by lawmakers to his own deeply rooted instincts to withdraw the United States from bloody foreign conflicts.

The veto, only the second time Mr Trump has used his power to block legislation passed by both houses of Congress, strikes down a resolution that invoked the War Powers Act to distance the United States from a four-year conflict that has killed thousands of civilians and resulted in a widespread famine.

The measure was a rebuke of Mr Trump’s support for Saudi Arabia even after the killing of dissident journalist Jamal Khashoggi. It was opposed by several of the president’s top advisers, including Secretary of State Mike Pompeo and the national security adviser, John Bolton, according to people who spoke with White House officials.

“This resolution is an unnecessary, dangerous attempt to weaken my constitutional authorities, endangering the lives of American citizens and brave service members, both today and in the future,” Mr Trump said in his veto message. The veto came only a month after he similarly rejected a bipartisan measure that would have overturned his declaration of a national emergency at the southwestern border. Congress failed to override that veto and appears similarly unlikely to muster the votes to override the Yemen veto.

Supporters of this resolution had higher hopes that Mr Trump might sign it. Although it went against a key ally, Saudi Arabia, it played to his long-standing opposition to US involvement in foreign wars. This was the first time War Powers legislation passed Congress with bipartisan support and reached a president’s desk.

But the rebuke of Saudi Arabia and the perceived threat to Mr Trump’s executive powers played a bigger role in his decision. “This is deeply disappointing,” said US congressman Ro Khanna, who was one of the original sponsors of the measure in the House and had sought a meeting with Mr Trump to try to persuade him to sign it. “The president had the opportunity to sign a historic War Powers Resolution and stand with a bipartisan coalition, including his allies Rand Paul, Mark Meadows and Matt Gaetz, to stop endless wars,” Mr Khanna said. “He failed to uphold the principles of the constitution that give Congress power over matters of war and peace.”

Mr Khanna was referring to the Republican senator from Kentucky, Mr Paul, and two Republican representatives, Mr Meadows from North Carolina and Mr Gaetz from Florida, who are closely aligned with Mr Trump but split with fellow Republicans to vote with Democrats in favour of the resolution. Members of the group had asked to meet with Mr Trump to make their case against a veto, but the White House brushed them off.

Mr Trump has spoken out for years against US military entanglements, whether in Iraq, Afghanistan or Syria. He has clashed with his generals over the timetable for withdrawing troops from Afghanistan and Syria. In his veto message, Mr Trump said he agreed with Congress that “great nations do not fight endless wars.” He noted that the United States was negotiating to end its involvement in Afghanistan and drawing down troops in Syria, after what he said was the conquest of 100 per cent of the territory once held by the Islamic State.

Yemen, however, is a different situation, he declared. The US provides logistical support to the Saudi-led coalition against the Houthi rebels. It stopped its most direct military involvement: in-flight refuelling of Saudi planes. And Saudi Arabia remains a staunch ally of the United States, the linchpin of its campaign to isolate Iran, which supports the Houthis in their uprising against the Yemeni government.

“We cannot end the conflict in Yemen through political documents,” Mr Trump said. “Peace in Yemen requires a negotiated settlement.” Saudi Arabia’s allies in the war praised Mr Trump, insisting that they continued to work for a settlement through the United Nations. “President Trump’s assertion of support to the Arab Coalition in Yemen is a positive signal of US resolve towards America’s allies,” the foreign minister of the United Arab Emirates, Anwar Gargash, said in a post on Twitter. “Common strategic interests are best served with this clear commitment.”

Critics, however, said Mr Trump’s veto amounted to a “green light” for continued atrocities in Yemen, where human rights groups said there were already 10 million people on the brink of famine and as many as 100 civilian casualties a week. “This veto by President Trump is morally wrong and strategically wrongheaded,” said David Miliband, the president of the International Rescue Committee. “It sets back the hopes for respite for the Yemeni people, and leaves the US upholding a failed strategy.”

Senator Tim Kaine, an advocate for congressional prerogative on matters of war, said the veto was “part of an alarming pattern of Trump turning a blind eye to Saudi Arabia’s actions that fly in the face of American values, like the murder of journalist and Virginia resident Jamal Khashoggi and the jailing of women’s right activists.”

Mr Trump spoke by phone last week with Saudi Arabia’s crown prince, Mohammed bin Salman, whom intelligence officials believe ordered the killing of Khashoggi in October in the Saudi Consulate in Istanbul. Trump has not accepted that assessment, saying the prince’s role in the killing was not clear.

Saudi Arabia’s support will be particularly critical in coming months, if, as expected, the White House finally presents its proposal for a peace agreement between Israel and the Palestinians. Mr Trump’s son-in-law and senior adviser, Jared Kushner, has spent months cultivating Arab leaders, chiefly Crown Prince Mohammed, to win their endorsement of the plan, which he has drafted.