Notre Dame will be rebuilt by 2024, Macron vows 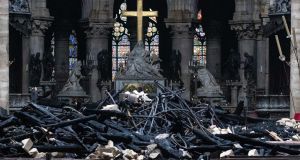 In a short televised address, Mr Macron praised the firefighters who risked their lives to save the 850-year-old cathedral from complete destruction after it became engulfed in flames on Monday evening.

The cathedral spire was destroyed and its roof gutted, but its bell towers were still standing and many valuable art works were saved after more than 400 personnel worked for 14 hours to contain and ultimately extinguish the blaze.

The entire structure had come within 15 minutes to half an hour of being lost to the blaze, France’s deputy interior minister, Laurent Nunez, disclosed. He said it was saved by firefighters who entered the burning building to prevent the fire from reaching the towers.

In his address on Tuesday night, Mr Macron said the French people would pull together to repair their national symbol.

“We will rebuild Notre Dame even more beautifully and I want it to be completed in five years. We can do it,” he said. “It is up to us to convert this disaster into an opportunity to come together, having deeply reflected on what we have been and what we have to be, and become better than we are. It is up to us to find the thread of our national project.”

Even before Mr Macron spoke, pledges to support the cathedral’s restoration had reached more than €750 million, including €500 million from the three billionaire families who own France’s giant luxury goods empires: Kering, LVMH and L’Oreal.

As France came to terms with the fire disaster on Tuesday, Paris felt as grey and saddened as in the aftermath of a terrorist attack. The fire dominated every conversation. Photographs of the cathedral’s 93m-high spire collapsing in flames appeared on the front page of almost every newspaper.

Grief combined with the search for an explanation. The Paris tribunal tasked 50 investigators with finding the cause of the fire. They have already questioned about 30 people who were erecting scaffolding for the renovation of the cathedral’s roof and spire. The fire started on the scaffolding.

Paris prosecutor Rémy Heitz said there was nothing to indicate criminal intent. Fires on construction sites are relatively common, often because blow torches heat up layers of wood under the metal they are welding. Investigators may never find the exact cause, because the cathedral’s roof was destroyed.

Mr Macron cancelled a televised address to the nation planned for Monday when the fire started. It was to have summarised conclusions of the “great national debate” that the president organised in response to the gilets jaunes protests. He also cancelled the press conference he was to have held on Wednesday.

“One must respect the time of remembrance and assume the responsibility which imposes itself in this moment of great national emotion,” the Élysée said by way of explanation.

Mr Macron received calls of condolences from the secretary general of the UN, Pope Francis and the leaders of Germany and the US. Wednesday’s meeting of his cabinet will be entirely devoted to Notre Dame.

The monument is synonymous with French history. It is the cardinal point from which all maps measure the distance to every French town. The country’s usually quarrelling politicians set aside their differences in grief for the cathedral.

“In a France more divided than ever . . . we constitute a single people, united in this tragedy,” said Senator Bruno Retailleau of the conservative Les Républicains. “A part of our history, of ourselves, is burning,” said the LR leader, Laurent Wauquiez.

Unity will doubtless prove temporary, but initial reactions appeared genuine. The far-left leader Jean-Luc Mélenchon, a Marxist, called the cathedral “a member of all our family”, adding, “We are in mourning at present.”