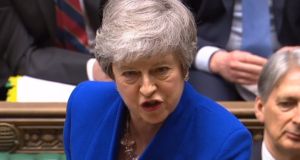 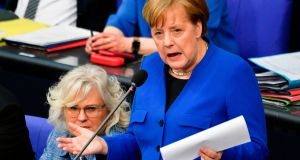 German Chancellor Angela Merkel met Mrs May in Berlin on Tuesday ahead of the Brussels summit, suggested they “may well” go for a longer delay, although the UK would be allowed to leave “very quickly” if Parliament approves a withdrawal deal. File Photograph: John Macdougall/AFP/Getty

German Chancellor Angela Merkel has warned Theresa May the EU is likely to agree to a longer Brexit delay than the one she is asking for.

The UK prime minister will meet the leaders of the remaining EU 27 later on Wednesday to press for a further extension to the Article 50 withdrawal process to June 30th to allow her more time to get a deal through Parliament.

However Mrs Merkel, who met Mrs May in Berlin on Tuesday ahead of the Brussels summit, suggested they “may well” go for a longer delay, although the UK would be allowed to leave “very quickly” if Parliament approves a withdrawal deal.

“We will shape this extension in such a way that, whenever Britain has approved the Withdrawal Agreement, Britain can then complete its orderly withdrawal very shortly after,” she told German MPs.

Her comments were in line with a plan put forward by European Council president Donald Tusk for an extension to the Article 50 withdrawal process.

European Commission spokesman Margaritis Schinas meanwhile said Brussels was “fully prepared” to cope in the event of a no-deal Brexit.

“This is not our desired outcome but we are not afraid of it. We are prepared,” he said.

With Britain set to leave the EU at 11pm on Friday without a deal unless an extension is agreed, Mrs May insisted she would be “pressing the case” in the Belgian capital for a shorter delay.

Mrs May attended prime ministers’ questions in Westminster before travelling to Brussels for the European Council meeting in Brussels which will determine whether the UK leaves the union in a no-deal Brexit on Friday or extends the deadline yet again, until May 22nd, June 30th or even into early 2020.

She remains under intense pressure from Conservative MPs – already angry at the failure to leave on March 29th as planned – who oppose any further delay.

At prime minister’s Questions, Tory backbencher Craig Tracey said she should abandon her “diluted deal” and take Britain out on World Trade Organisation terms, while Henry Smith warned that an extension would cost the UK £1 billion a month.

Mrs May however told MPs that Britain would already be outside the EU if they had been prepared to vote for her Withdrawal Agreement.

“We could actually have been outside the EU by now if we had managed to get the deal through.”

Earlier, Brexit Secretary Stephen Barclay insisted ministers were committed to taking Britain out of the EU at the “earliest opportunity”.

Mr Barclay, a Brexiteer, sidestepped questions as to whether Mrs May could remain in office if the EU insisted on a longer delay.

In contrast, pro-EU Justice Secretary David Gauke suggested she could carry on until she has taken the country through the current phase of the negotiations and Britain has finally left the EU.

“I don’t think we should be rushing to change our leader when there is a big task to be done,” he told BBC Radio 5 live.

The depth of the anger within the Tory ranks was underlined by a Commons vote on Tuesday, when 97 Tory MPs voted against a motion backing Mrs May’s call for an extension which only passed with the support of opposition MPs.

Meanwhile, veteran Tory Eurosceptic Sir Bill Cash has written to Mr Tusk warning that an extended delay was likely to face a legal challenge in the British courts, “thus further prolonging the uncertainty surrounding the UK’s exit from the EU”.

In a letter to the leaders of the remaining EU27, Mr Tusk said there was “little reason to believe” that the ratification of Mrs May’s beleaguered Brexit deal could be completed by the end of June.

He called for the European Council to discuss an alternative, longer extension, such as a “flexible extension” lasting “as long as necessary and no longer than one year”.

Mr Tusk wrote: “The UK would be free to leave whenever it is ready. And the EU27 would avoid repeated Brexit summits.

“Importantly, a long extension would provide more certainty and predictability by removing the threat of constantly shifting cliff-edge dates.”

The unanimous agreement of all 27 remaining EU states is needed to avoid a no-deal Brexit on the scheduled date of April 12th.

EU leaders will gather for talks with European Parliament president Antonio Tajani on Wednesday evening, before hearing from Mrs May.

They will then meet for dinner without her to agree a response to the UK’s extension request.

Taoiseach Leo Varadkar has warned that the EU should not offer the UK an extension on terms the latter cannot accept at Wednesday’s summit because it could lead to a crash-out on Friday.

Meanwhile, Labour leader Jeremy Corbyn said discussions were continuing between his party and the Conservatives in an attempt to find a compromise Brexit deal. - PA