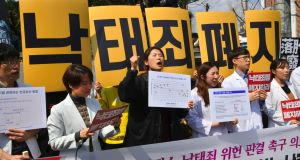 South Korea’s Constitutional Court said on Thursday a law criminalising abortion was unconstitutional, a landmark ruling that will overturn a ban on abortion that had been in place since 1953.

The court said in a statement the outright ban on abortion, as well as a law that made doctors who conduct abortions with the woman’s consent liable to criminal charges, were both unconstitutional.

However, the court said the current law would remain in effect until the end of next year, after which it will be scrapped.

The court had previously upheld the abortion law in 2012 in a closely divided decision, dividing the eight justices evenly.

“The law criminalising a woman who undergoes abortion of her own will goes beyond the minimum needed to achieve the legislative purpose and limits the right of self-determination of the woman who has become pregnant,” the court said in its ruling.

South Korea’s ban on abortion dates from 1953, when the country’s criminal law was first enacted after the 1950-1953 Korean War, and had not changed materially since.

The law states that a woman who undergoes abortion will serve a prison sentence of one year or less, or pay a fine of 2 million won (€1,556) or less.

The law also states that medical professionals including doctors who engage in abortion at the request of the woman will serve a prison sentence of two years or less, and have their license suspended for seven years.

There are exemptions, with current law allowing abortions within 24 weeks of becoming pregnant for medical purposes such as a hereditary disease or the pregnancy causing grave danger to the health of the mother, or in the case of pregnancy through rape.

“If the case does not fall under an exemption, the law forces the pregnant woman to maintain the pregnancy completely and uniformly without exception even in cases where there are circumstances causing conflicts about abortion due to diverse, widespread societal and economic reasons,” the court said.

The court’s ruling reflects the trend toward decriminalising abortion, as the number of actual cases where abortion was criminally punished had been falling.

Only eight new cases of illegal abortion were prosecuted in 2017, down from 24 in 2016, according to South Korean judicial data. Out of the 14 abortion cases that were decided in lower courts in 2017, 10 postponed a ruling on condition that no crime be committed for a certain period.