Trump tries to bring the Golden State to heel 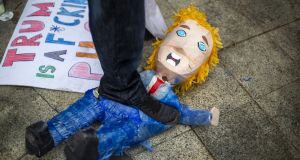 A counter-demonstrator steps on a pinata during a President Donald Trump rally in Los Angeles, California. Photograph: David McNew/Getty

Here on the west coast of the United States, the daily drama of Washington politics and the presidency of Donald Trump can seem a world away.

California, the country’s most populous state, has been something of a thorn in the side of the 45th president.

Though the state that produced Ronald Reagan and Richard Nixon still has strong Republican support in some suburban areas and more rural parts of the state, its two big urban enclaves of San Francisco and Los Angeles voted overwhelmingly for Hillary Clinton in 2016.

Trump deemed the state “out of control” early in his presidency, and frequently accuses California of facilitating “massive voter fraud” in the 2016 election.  Since Trump’s election, the state’s attorney general, Xavier Becerra, has filed no fewer than 60 lawsuits against the Trump administration, on everything from environmental policy, to healthcare, to the rights of so-called sanctuary cities – cities that welcome undocumented migrants.

Trump’s feud with the Golden State escalated earlier this month. The president announced during a two-day fundraising trip through the state that the federal government intends to disband California’s long-standing authority to set its own emissions standards.

The announcement elicited a furious reaction from state authorities. “See ya in court,” tweeted governor Gavin Newsom, promptly filing a lawsuit. California has long been ahead of the game when it comes to climate change, committing to uphold the terms of the Paris climate accord even when the Trump administration abandoned the agreement.

The state was given the power under the Clean Air Act of 1970 to set its own vehicle emissions standards, and has long had stricter emissions rules than the rest of the country. With the Trump administration trying to roll back Obama-era emissions standards on vehicles, they are turning their focus to California’s laws, arguing that there should be one national standard.

The administration’s move may also have been prompted by a deal struck in July between four of the country’s largest car manufacturers and the state of California, which will see car makers manufacture more fuel-efficient cars – effectively bypassing the federal government. The Trump administration is not happy, and the department of justice has opened an anti-trust investigation into the matter.

In the latest twist, the Environmental Protection Agency wrote to the governor this week, threatening to withhold US federal highway funds, claiming that the state had “the worst air quality in the United States”.

The clash between Trump and California is not confined to climate change.

The US president has taken a newfound interest in the homelessness problems of San Francisco and Los Angeles.

During his recent trip to the coastal cities, he claimed the issue was ruining the “prestige” of the cities. People “moved to Los Angeles or they moved to San Francisco because of the prestige of the city, and all of a sudden they have tents”, he said in Silicon Valley. “Hundreds and hundreds of tents and people living at the entrance to their office building. And they want to leave.”

He also claimed that homeless people are making California’s police officers sick, after one Los Angeles police officer was reported to have contracted typhus. “They’re actually sick; they’re going to the hospital,” the US president said. “We can’t let Los Angeles, San Francisco and numerous other cities destroy themselves.”

On Thursday, the EPA further inflamed the situation by claiming it is concerned about the impact of homelessness on water quality in the state, suggesting that human waste and discarded needles were entering the water system.

California’s political leaders have hit back, accusing the Trump administration of targeting the state for political reasons.

California undoubtedly has an issue with homelessness – a measure of the startling social inequality that underpins the laid-back image of the affluent state. Half of America’s homeless population lives in California, a result in part of a runaway housing market that has left home ownership and rental properties out of reach for many residents.

Earlier this month the state enacted a new rental cap, limiting annual rent increases to 5 per cent after inflation and tightening up rules on eviction. The move was hailed by housing campaigners as a welcome intervention in the market.

Whether it has a real impact on the housing needs of California’s most vulnerable residents remains to be seen. But what is clear for most residents is that the problem should only be addressed at state level, and not by the intervention of Donald Trump.