US Politics: US accumulated foreign interests in 20th century that cannot be divested fast 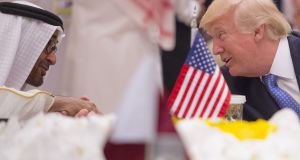 If it were anyone else, we might call it poetry. US president Donald Trump compresses what millions think into phrases that are more like verse than prose in their sparseness. “Sand and death” was his take on Syria this year, and, with that, the Horace of Mar-a-Lago brought home a couple of thousand soldiers. The words rather shortchange a country whose capital predates Washington by a millennium or five, but the point of a Trumpism is not accuracy. The point is to get lots of Americans nodding.

Each president since the end of the cold war was elected on a sand-and-death view of the Middle East. And each has then failed to wean the US off the region. Bill Clinton thought foreign adventures a luxury when the home front needed care. Six years later, he was bombing Iraq. George W Bush called for a more “humble” US abroad. He ordered the two longest wars in American history. Barack Obama sought to unwind both of those fiascos. He presided over new ones in Libya and Syria.

With the Gulf once again so fraught, Trump is leading the US through the fourth iteration of this cycle inside a generation. Each time, hopes are raised of a quieter life. Each time, they fail to materialise. Trust in government cannot but suffer.

The problem, I used to think, is the failure to honour these promises of retrenchment. In truth, the promises are the problem. The US accumulated foreign interests over the course of the 20th century that cannot be divested at speed, at least not without grievous cost, and at least not in a region as intractable as this one. A responsible political class would not pretend otherwise every four years. It would gird voters for a process of extrication that might turn out to be the work of a human lifetime.

Last month, the Pentagon’s inspector general warned of a resurgent Islamic State in Syria, delicately citing Trump’s troop withdrawal as a potential cause. It was hard not to think of Obama’s exit from Iraq in 2011. Within three years of that “departure”, the US was back to fight Isis, though mainly from the air.

These are perhaps the two least alike presidents out of all 45 in the history of the republic. Yet both fell for an ideology we might call “bring-them-homeism”. And neither was or has been able to act on it in full. At some point, the telling fault has to be with the idea and not with the goodness of the executive’s word.

A country’s relative decline does not bring about an automatic and commensurate reduction of its workload. Its foreign burdens can be a severely lagging indicator of its power. Britain was displaced as the largest economy in the 19th century but its empire would not peak in size until the 1920s. It was still fighting in Malaya as late as 1960.

Some of this was British vainglory, but some of it was the sheer difficulty of letting go without incurring chaos or ignominy. And this was a nation that had a friendly America to make way for. In the Middle East, the US would be making way for Russia, or Iran, or no alternative power to speak of.

The problems with extrication do not end there. The American homeland will also continue to face terrorist threats that are hatched or inspired in the Middle East. Even if it can provide for its own energy needs, it will never be relaxed about the region’s resources and waterways coming under the control of any one power. And none of this reckons with the push-pull of local allies who want the US to stay, but only on their own terms.

Over the next year or so, Trump and assorted Democrats will have an electoral incentive to pretend that none of this is true. They will pledge to focus more on the Midwest than the Middle East, which worked to handsome effect in 1992, 2000, 2008 and 2016. The president’s recent dismissal of John Bolton, his restlessly militant national security adviser, cleared the way for this quietist campaign line. There is no cost – except to trust in politics, when the US is chin-deep in some Gulf crisis within years.

The cycle of raised and dashed hopes can only be broken with extreme candour. Disengagement from the Middle East, a budding president should say, is going to be fitful and often humiliating work, if it is ever completed at all. During the process, the US will often be involved enough to sustain costs, but not so involved as to make a decisive difference in the region.

This in/out state is the worst of all available options, except for the others. Even if an empire can be acquired in a fit of absent-mindedness, as JR Seeley alleged of Britain’s, it cannot be relinquished in the same way. Nothing will commend a pretender to the White House so much as the frankness to say so. – Copyright The Financial Times Limited 2019