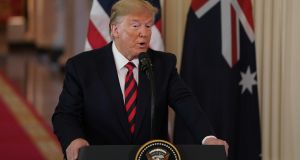 US president Donald Trump dismissed a deepening whistleblower controversy involving a phone call with a foreign leader as “ridiculous”, branding the supposed whistleblower as a “partisan”.

Speaking alongside Australian prime minister Scott Morrison in the Oval Office on Friday, Mr Trump said his conversations with world leaders were “always appropriate”, dismissing the reports as “another political hack job”.

It emerged this week that a senior intelligence official raised concerns last month with the inspector general of the intelligence community over a phone conversation Mr Trump had with a foreign leader.

At least two US media outlets reported that the conversation involved Ukraine, with some suggestions that Mr Trump asked recently elected Ukrainian president Volodymyr Zelensky to investigate former vice-president Joe Biden’s son’s involvement with the board of a Ukrainian gas company in exchange for military help for the country.

Asked on Friday if the conversation in question was his phone call with Mr Zelensky on July 25th, Mr Trump replied: “I really don’t know.”

He was also asked whether he discussed Mr Biden during the phone call. “It doesn’t matter what I discussed,” he said of one of the Democratic candidates in next year’s presidential election, but he added that “someone ought to look into Joe Biden” and claimed the “fake news” media would not do so because he is a Democrat.

The involvement of Mr Biden’s son Hunter with Ukrainian business while his father was US vice-president has been a subject of interest for many on the right for months and is regularly covered on Fox News.

Mr Trump’s attorney Rudy Giuliani cancelled a planned trip to Ukraine in May to investigate the matter.

In a lengthy interview on CNN on Thursday night, Mr Giuliani again suggested that the president was within his power to investigate corruption in the country.

Democrats have demanded answers. On Thursday the inspector general appeared before the Democratic-controlled House intelligence committee. But he failed to disclose details of the whistleblower’s complaint. He said he had consulted with the temporary director of national intelligence, Joseph Maguire, to ask if he could pass on the whistleblower’s information to the congressional committees.

But he was effectively blocked from doing so, despite laws requiring urgent security concerns of this kind to be turned over to relevant congressional oversight committees.

Any move by the US president to ask a foreign government to find negative information about a political rival could be found to be illegal. Mr Trump is due to meet the Ukrainian president next Wednesday at the United Nations General Assembly.

During his press conference with Mr Morrison at the White House, Mr Trump also left open the possibility of further action against Iran, as the administration unveiled details of new sanctions against the country.

“Going into Iran would be a very easy decision . . . most people thought I would go in within two seconds, but plenty of time,” Mr Trump said, adding that he was showing “great restraint”.

Iran’s central bank and the country’s national development fund are among the entities being hit by additional sanctions, as the United States increases the economic strain on the country.

Announcing the details, the state department called last weekend’s attack on Saudi oil facilities as an “act of aggression” that was “sophisticated in its planning and brazen in its execution”.

“Attacking other nations and disrupting the global economy has a price. The regime in Tehran must be held accountable through diplomatic isolation and economic pressure,” the statement said.

Senior Iranian officials will travel to New York next week for the UN General Assembly after the United States issued visas for president Hassan Rouhani and foreign minister Mohammed Zarif. Iran said earlier this week that it would not be meeting Mr Trump on the fringes of the summit.