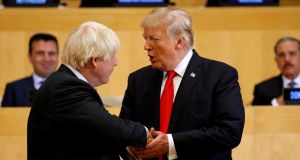 US president Donald Trump has said he wants an ‘ambitious free-trade agreement’ with the UK after Brexit. File photograph: Kevin Lamarque/Reuters

This week the issue of Brexit made it across the Atlantic as members of US Congress voiced their concern about its impact on Northern Ireland.

As the new British government veers closer to a no-deal scenario, concern is growing among the politically influential Irish-American lobby about the implications for the Belfast Agreement.

On Monday a powerful bipartisan group of former members of Congress and ambassadors wrote to new Northern Ireland Secretary Julian Smith expressing alarm about the rhetoric from London.

“We remain deeply concerned given the new Prime Minister’s recent statement in the Commons that there can be no Irish Backstop in the Withdrawal Agreement, even one with a time limit,” the letter states. “The Irish Border must remain open and seamless so that we can maintain the peace that we all have worked so hard to achieve together.”

Current members of Congress are also watching with increasing unease as Britain appears to move closer to a no-deal. Richard Neal, the chair of the ways and means committee, which oversees trade policy, warned Boris Johnson that “this is not about a return to empire”.

“There should be no compromise,” on the backstop he told The Irish Times on the eve of Johnson’s visit to Belfast. “The Good Friday Agreement [or Belfast Agreement] has worked as well as anybody could have imagined. It brought to rest the longest-standing political conflict in the history of the western world, and I don’t think there’s any reason for the Irish Government to back away.”

His intervention follows comments by House speaker Nancy Pelosi in which she said that Congress will not endorse a trade agreement between the United States and the UK if the Belfast Agreement is jeopardised.

The new government in Britain gained some comfort from comments made by president Donald Trump last week after his first phone call with Johnson as prime minister. Trump said he wanted an “ambitious free-trade agreement” between the two countries, with formal talks to begin “as soon as possible after Britain leaves the EU”.

But despite his lofty promises the political realities of striking a trade deal between the two countries is infinitely more complex.

In addition to Irish-American concerns about the return of a hard border, the backstop complicates the matter in other ways. As a recent paper by the UK Trade Policy Observatory run by the University of Sussex and Chatham House notes, the inclusion of the backstop as set out in the withdrawal agreement would constrain a potential UK-US agreement. Noting that one of the key variables in the negotiation of a new bilateral trade agreement “will be the UK’s degree of regulatory and tariff alignment with the EU”, the paper asserts that the level-playing-field requirements set out in the backstop proposal would limit the potential of a US-UK trade deal, at least in terms of goods.

The paper concludes that “a quick and economically significant outcome to US-UK trade negotiations seems unlikely”.

While formal negotiations between the UK and US cannot start until Britain leaves the EU, a joint working group has been meeting informally to discuss negotiating priorities.

Although Britain has been vague about its red lines, the Trump administration has not. The office of the US trade representatives has set out ambitious objectives, including slashing tariff and non-tariff barriers on food and decreasing regulatory divergence – demands that many fear could allow chlorinated chicken or “hormone” beef into the UK.

The US ambassador to the UK, Woody Johnson, sparked alarm recently in Britain by suggesting that the NHS would be “on the table” in any negotiations, by allowing American companies to bid for contracts in the public sector.

Dominic Raab is expected in Washington next week for his first official visit as foreign secretary, with trade expected to top the agenda. Despite the display of bonhomie between Trump and Johnson, relations between the two countries at official level are difficult following the departure of UK ambassador Kim Darroch.

Johnson may boast about the special relationship, but the realities of US trade policy mean that agreement on a bilateral trade deal will be an uphill battle.