Q&A: What is the Ukraine scandal that has endangered Trump? 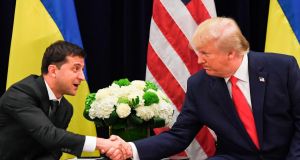 Why is Donald Trump facing an impeachment inquiry over Ukraine?

Democrats launched impeachment proceedings over allegations that centre on a phone conversation between Trump and Ukrainian president Volodymyr Zelenskiy on July 25th.

Trump has admitted to using the call to urge Zelenskiy to launch an investigation into the actions of Joe Biden, who hopes to be the Democrats’ challenger in next year’s president election.

Trump and his lawyer Rudy Giuliani are pushing claims that when he was US vice-president, Biden threatened to withhold aid from Ukraine unless it sacked then prosecutor general Viktor Shokin, to stop him investigating Ukrainian gas firm Burisma, where his son Hunter Biden was a director.

Three congressional committees are now investigating the actions of Trump and Giuliani towards Ukraine, with particular focus on whether there was any threat to halt some US funding for Ukraine if it refused to look into Biden’s actions.

The White House did delay payment of $250 million in US military aid to Kiev this summer, before allowing the money to be disbursed this month along with a further $140 million, which is thought to be part of a state department programme.

The whole scandal arose after a whistleblower in the US intelligence community lodged a formal complaint about Trump’s actions in relation to an unnamed foreign leader; media reports say the complaint relates not to a single phone call, however, but to a series of incidents that were cause for “urgent concern”.

What does Trump say?

The US leader insisted the July 25th call with Zelenskiy was “perfect” and “totally appropriate” and said he would release a transcript of the conversation.

The rough transcript released on Wednesday, however, which showed the president calling his request to investigate Biden “a favour”, did nothing to ease the crisis. Most surprisingly, perhaps, it showed that Trump asked the Ukrainian president to speak to William Barr, the US attorney general, as well as Giuliani, about Hunter Biden and his father.

Trump derides the bid to impeach him as a desperate ploy by his Democratic enemies.

How has Ukraine responded?

Kiev wants above all to safeguard its close relationship with the US, which has provided Kiev with financial, diplomatic and military support in its five-year conflict with Russia.

Top Ukrainian officials insist Zelenskiy has the right to keep conversations with other leaders confidential and that Trump did not put him under undue pressure.

The two men met on Wednesday evening at the United Nations in New York and had a somewhat awkward exchange in front of the press.

Asked whether he was pressured by Trump to investigate the Bidens, Zelenskiy said: “I don’t want to be involved to democratic open elections of US state. We had I think good phone call, it was normal, we spoke about many things . . .I think, and you read it, that nobody pushed me.”

Do Trump’s allegations against Biden stand up?

As of now – no. Biden has acknowledged threatening to withhold a US loan guarantee to Ukraine unless its then president, Petro Poroshenko, sacked Shokin, his prosecutor general. He was fired in March 2016.

At the time however, there was no indication that Shokin was investigating the Burisma firm where Biden’s son had a place on the board, and Ukraine’s western allies and leading anti-corruption campaigners were all demanding the removal of an ineffectual prosecutor general who was seen as an obstacle to reform and major investigations.