US President Donald Trump assailed Democrats for their impeachment inquiry and said there should be a way to stop them, perhaps through courts. Video: Reuters 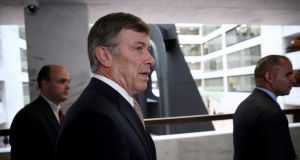 The impeachment crisis engulfing US president Donald Trump intensified on Thursday after a whistleblower alleged that the White House sought to “lock down” details of a phone call with Ukrainian president Volodymyr Zelenskiy.

Dated August 12th, the complaint raises concerns that the president pressured a foreign country to investigate one of the president’s main domestic political rivals – a reference to Mr Trump’s call with the Ukrainian president in which he asked Mr Zelenskiy to investigate Joe Biden and the business dealings of his son, Hunter.

But it also states that White House officials had intervened to “lock down” records of the phone call.

“This set of actions underscored to me that White House officials understood the gravity of what had transpired in the call,” the anonymous whistleblower wrote.

The seven-page document also alleges that White House officials used a separate electronic system to store the information – a system that would have limited the number of people privy to the information.

“One White House official described this act as an abuse of this electronic system because the call did not contain anything remotely sensitive from a national security perspective,” the complaint states.

The complainant – who did not witness the disputed phone call first-hand – also claims that several White House officials said they were “deeply disturbed by what had transpired in the phone call” and that “they had witnessed the president abuse his office for personal gain”.

“They told me there was already a ‘discussion ongoing’ with White House lawyers about how to treat the call because of the likelihood, in the officials’ retelling, that they had witnessed the president abuse his office for personal gain.”

A whistleblower with second hand information? Another Fake News Story! See what was said on the very nice, no pressure, call. Another Witch Hunt!

In a summary of the phone call released on Wednesday, it was revealed that Mr Trump offered to enlist attorney general William Barr and his personal attorney Rudy Giuliani to help Mr Zelenskiy’s investigation.

Mr Trump lashed out at the latest developments regarding his phone call with Mr Zelenskiy, dismissing the allegations as “fake news”.

“A whistleblower with second hand information? Another Fake News Story!” he tweeted. “Another Witch Hunt!”

The LA Times also reported that Mr Trump compared the whistleblower’s source to a “spy” during a private event on Thursday .

“You know what we used to do in the old days when we were smart with spies and treason, right? We used to handle it a little differently than we do now,” Mr Trump was reported to have said.

I think what the DNI did was broke the law. The law is very clear

But House speaker Nancy Pelosi vowed to proceed with her impeachment inquiry into the president’s activities.

“This is a cover-up,” she said at her weekly press conference in Washington shortly after the whistleblower complaint was released.

In particular, she criticised Mr Maguire for failing to pass the original complaint to Congress. “I think what the DNI did was broke the law. The law is very clear. The DNI shall convey the complaint to the intelligence committee,” she said.

In testimony to the House intelligence committee, Mr Maguire defended his handling of the controversy as he faced questions from Democratic and Republican members of the committee.

Democrats questioned why he had not passed on the complaint he had received from the inspector general for the intelligence services to relevant House and Senate committees – as required by the whistleblower statute.

Instead he went to the Department of Justice for advice.

Mr Maguire argued that the information he received was unique because it involved the president, and not simply members of the intelligence community, and hence may have been subject to executive privilege.

He also said that, having reviewed it, the Department of Justice had concluded that the complaint was not an “urgent concern” and hence did not need to be transmitted to the congressional intelligence committees.

In response, committee chairman Adam Schiff said that the relevant statue demanded that complaints be provided to the committee.

“The reason Congress wrote the statute that way is that, particularly in the intelligence community, we are reliant on whistleblowers,” he said.