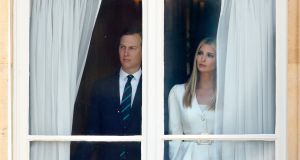 Jared Kushner and Ivanka Trump in Buckingham Palace, London, in June. Both are a regular, but silent, presence at White House events, eschewing the kind of Twitter-fuelled bombast that the president embraces. Photograph: Max Mumby/Indigo/Getty Images

Donald Trump may have had the highest turnover of staff of any US president, but some things remain constant. Trump’s family has remained a continuous presence at his side since his election. Chief among them are his daughter Ivanka and her husband, Jared Kushner.

The couple moved to Washington with the president in 2017, taking up residence around the corner from Barack and Michelle Obama.

Both have offices in the West Wing. Ivanka’s title is “adviser to the president”. The White House website outlines her experience in the Trump Organization, where she “led some of the company’s largest and most complex transactions”. It also mentions that she is the author of two New York Times best-selling books – though how her tomes, The Trump Card: Playing to Win in Work, and Life and Women who Work: Rewriting the Rules for Success, prepared her for the world’s most important centre of power is unclear.

Her husband is listed as senior adviser to the president, with the White House noting his role as the “senior administration official” in charge of the Middle East peace process and managing relations with Arab allies.

So far progress on the Middle East peace process has stalled. A flagship conference in Bahrain in June was effectively boycotted by the Palestinians and Israel. Kushner’s links with Saudi crown prince Mohammed bin Salman cultivated in the early days in his role have also raised questions given the murder of journalist Jamal Khashoggi.

Kushner has had more success domestically, with a criminal reform Bill last year. A rare example of bipartisan co-operation, the Bill eases punitive sentences and allows prisoners to apply for shorter prison times.

Both are a regular – but silent – presence at White House events, eschewing the kind of Twitter-fuelled bombast that the president embraces.

But in Ivanka’s case in particular, she shares her father’s talent for shaping the media narrative.

This week in Washington, unnamed sources suggested that Ivanka has been reaching out to members of Congress about gun-reform legislation – an issue that has returned to the political agenda following the Ohio and Texas shootings.

It is not the first time she has been mentioned in connection with more progressive policies in the midst of a national scandal. Last year, when Americans reacted with horror at images of children in cages, there were reports that Ms Trump, a mother of three, asked her father to intervene.

Critics have reacted with cynicism to Ivanka’s efforts to distance herself from controversial aspects of her father’s policy platform while continuing to serve in the White House. Supporters see it more strategically – a canny attempt by the first daughter to protect her reputation if she considers a run for political office in the future.

While Ivanka has managed to stay away from the political fray, her brother Donald Trump jnr takes a different approach.

The eldest Trump son, who charmed locals in Doonbeg earlier this year, is an increasingly vocal presence, particularly on the re-election campaign trail.

The 41-year-old has a book out later this year, titled Triggered: How the Left Thrives on Hate and Wants to Silence Us.

While he is expected to play a key role in his father’s re-election campaign, he will also campaign for several Republican Congress members facing tough election battles in 2020.

Politically, Trump jnr has more common ground with traditional elements of the Republican base than his sister – he is a proud gun owner, for example. His partner is former Fox News host Kimberly Guilfoyle, a regular fixture by his side at public events.

His style also echoes that of his father. He has an active social media presence which he uses to goad his father’s critics. This week he inserted himself into a controversy involving CNN host Chris Cuomo, who was taped reacting heatedly to a man who called him “Fredo”, a reference to the fictional character Fredo Corleone from the Godfather.

The irony was not lost on many. He has also been compared to the Godfather character by columnists who have cast him as the needy son of a mafia boss who craves his father’s approval.

Whether the younger Trump wants to continue the political dynasty by running for office remains to be seen. But expect to see a lot more of Donald jnr in the coming months.