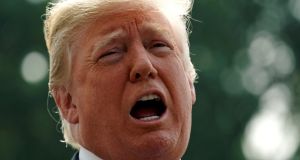 US president Donald Trump faced an unprecedented outcry from former intelligence officials on Friday after stripping the security clearance of former CIA director John Brennan, but Mr Trump defended his move and said he planned another one soon.

The bipartisan group, which included Robert Gates, George Tenet, David Petraeus, James Clapper and Leon Panetta, lashed out at the president in a scathing letter released late on Thursday.

By Friday evening, another 60 former intelligence officers added their voices in their own letter.

Mr Brennan, a former official in the Obama administration and sharp critic of Trump, has said he will not be deterred by the removal of his security clearance. Brennan described Mr Trump’s actions at a summit with Russian president Vladimir Putin in Helsinki last month as treasonous.

In an interview on MSNBC on Friday night, Mr Brennan did not back down on his criticism of Mr Trump’s conduct as president, but he did walk back his comment in July that Mr Trump’s behavior in Helsinki was “nothing short of treasonous.”

“I didn’t mean that he committed treason, but it was a term that I used, ‘nothing short of treasonous’,” Mr Brennan said in the interview.

Mr Trump defended his decision, announced on Wednesday, saying it had elevated the former CIA chief rather than hampering his freedom of speech.

The president also told reporters he was likely to revoke the clearance of Bruce Ohr, a Department of Justice official who is linked to a dossier on Mr Trump’s campaign and Russia that was compiled by former British spy Christopher Steele.

Mr Trump lashed out again at special counsel Robert Mueller, who is leading an investigation into possible collusion between his 2016 campaign and Moscow. Without citing evidence or offering proof, Mr Trump said that Mr Mueller had conflicts of interest.

“....An incredibly corrupt FBI & DOJ trying to steer the outcome of a Presidential Election. Brennan has gone off the deep end, he’s disgraced and discredited himself. His conduct has been outrageous.” Chris Farrell, Judicial Watch.

In the statement released late on Thursday, officials who served under Republican and Democratic officials said they did not necessarily agree with Brennan’s harsh criticism of the president, but that security authorizations should be based on national security, not politics.

“We all agree that the president’s action regarding John Brennan and the threats of similar action against other former officials has nothing to do with who should and should not hold security clearances - and everything to do with an attempt to stifle free speech,” the former CIA directors, deputy directors and directors of national intelligence said.

“We have never before seen the approval or removal of security clearances used as a political tool,” they wrote.

Mr Petraeus, one of the signers, was once considered by Trump as a candidate for secretary of state.

Like the signatories of the first letter, the 60 former CIA officers said that while they do not necessarily agree with Mr Brennan’s opinions: “It is our firm belief that the country will be weakened if there is a political litmus test applied before seasoned experts are allowed to share their views.”

The second group included Henry Crumpton, who also served as the State Department’s top counter-terrorism official and Letitia Long, a former head of the National Geospatial-Intelligence Agency, which oversees the military satellites used for intelligence collection, navigation and communication.

In another pushback against the president, retired Navy Admiral William McRaven, who oversaw the operation that killed Osama bin Laden, praised MrBrennan and asked Mr Trump to revoke his own security clearance as well, writing in a Washington Post opinion piece that he would “consider it an honor.”

Mr Trump challenged the suggestion that he was trying to silence critics by taking away security clearances.

“There’s no silence. If anything, I’m giving them a bigger voice,” Mr Trump said.

“Many people don’t even know who (Mr Brennan) is, and now he has a bigger voice. And that’s OK with me, because I like taking on voices like that. I’ve never respected him.”

The White House said it was studying a list of other individuals for security clearance review, and Mr Trump suggested Bruce Ohr was at the top of that list.

“I think Bruce Ohr is a disgrace,” he said. “I suspect I’ll be taking it away very quickly.”

Mr Ohr, who works in the Justice Department’s criminal division, was in contact with Steele, the former British spy who compiled a dossier of allegations of possible collusion between Mr Trump’s camp and Russia during the 2016 presidential campaign.

Russia denies having meddled in the 2016 election, but three US intelligence agencies reported in January 2017 that Moscow had intervened and tried to help Trump beat Democratic presidential candidate Hillary Clinton.

Mr Putin told reporters in Helsinki, while standing next to Trump, that he had wanted the former New York businessman to win the White House. - Reuters