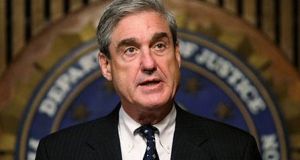 Special Counsel Robert Mueller (above) has recommended that former Trump campaign aide George Papadopoulos be sentenced to up to six months in prison for lying to federal agents investigating whether Russia interfered in the 2016 US presidential election. Photograph: Getty Images

Special Counsel Robert Mueller recommended in a court filing on Friday that a judge sentence former Trump campaign aide George Papadopoulos to up to six months in prison for lying to federal agents investigating whether Russia interfered in the 2016 US presidential election.

Mr Papadopoulos pleaded guilty in October to lying to FBI agents and is scheduled to be sentenced on September 7th.

According to Mr Mueller’s sentencing memorandum to the judge, Mr Papadopoulos lied about his contacts with people who claimed to have ties to top Russian officials, including his meeting with a professor who said Russia had “dirt” on Democratic presidential candidate Hillary Clinton.

“The defendant’s crime was serious and caused damage to the government’s investigation into Russian interference in the 2016 presidential election,” Mr Mueller’s memo said.

“The defendant lied in order to conceal his contacts with Russians and Russian intermediaries during the campaign and made his false statements to investigators on January 27th, 2017, early in the investigation, when key investigative decisions, including who to interview and when, were being made,” Mr Mueller said.

Mr Mueller said the government believed a sentence of up to six months in prison was “appropriate and warranted” along with a fine of $9,500.

Mr Papadopoulos unwittingly played a key role in triggering the FBI investigation into possible collusion between Donald Trump’s campaign in Russia, which the president repeatedly has denounced as a “witch hunt.”

While drinking at a London bar in May 2016, he told the Australian ambassador to Great Britain that the Russians had hacked thousands of emails that could damage Clinton’s presidential campaign.

When the emails began appearing publicly two months later, the envoy, Alexander Downer, told US diplomats about what Mr Papadopoulos had said, according to US officials familiar with the events.

Mr Muller also told the judge that Mr Papadopoulos had not fully cooperated with prosecutors.

“The defendant did not provide ‘substantial assistance,’ and much of the information provided ... came only after the government confronted him with his own emails, text messages, internet search history and other information it obtained via search warrants and subpoenas,” Mr Mueller wrote.

Mr Mueller also said Mr Papadopoulos avoided until the last moment telling prosecutors about a cell phone he used in London that had “substantial communications” on it between he and the professor who claimed to know about Russian information on Clinton. - Reuters